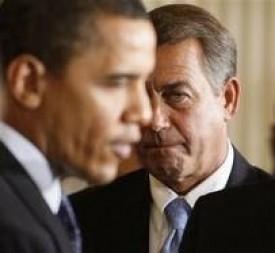 As Congress gets ready to embark on their five week vacation, President Obama readies his family for their 16 day Martha’s Vineyard summer trip. This has become an annual event for the Obama family and it gives the President more opportunities for his favorite activities such as biking and golfing. Who knows the full extent of Vice President Joe Biden’s summer vacation, but no doubt the agenda will include skinny dipping. According to Ron Kessler, in his new book, “The First Family Detail,” Biden enjoys naked swimming, to the consternation of the female Secret Service agents assigned to protect him.

While the politicians are getting ready to have fun, the world is literally in flames. The Ukraine civil war is continuing, while the conflict between Israel and Hamas shows no signs of ending. An Ebola epidemic is spreading in Africa as there is no cure for the disease.

On the home front, our border is being overrun and the President’s only solution is to demand more money. This has forced Texas Governor Rick Perry take action and supplement out manned Border Patrol agents with 1,000 members of his National Guard.

The economy is stagnant, as shown in the poor job growth reported in July. Only 209,000 jobs were created last month, fewer than economists predicted, and the unemployment rate rose to 6.2%. More importantly, over 92 million Americans remain outside of the work force and the labor force participation rate is at an anemic level of only 62.9%. Those lucky Americans with jobs face stagnant wages while inflation looms in the horizon.

Overall, it is a very perilous time for our top political leaders to start extended vacations. Since they will not be working during the month of August, maybe Americans really do not need them to come back in the fall. What good do they do anyway?

Possibly this Congress should stay on vacation until after the mid-term elections and let a new, more dedicated, Congress return to work in 2015.

The Senate under Harry Reid does literally nothing and the House under John Boehner is not much better. They have not passed a balanced budget amendment, real tax relief, or demanded that the current laws be enforced on border security or illegal immigration. Their answer is to spend money we do not have, increase the deficit and plunge the nation into more debt. Our national debt currently stands at 17.6 trillion dollars and rising. To make matters worse, Obamacare is a national disaster and Congress refuses to defund this unconstitutional power grab.

The problem is that Boehner is a raging moderate. If he had his way, there would be an immigration reform that would basically grant amnesty for the 20 million illegal aliens in this country.

If President Obama unilaterally decides to bestow amnesty on 5-10 million illegal aliens and give them work permits, many respected analysts believe it would clearly be an impeachable offense. Yet, Boehner ruled out impeachment and said the whole concept is a “scam.”

In reality, it is no “scam” to impeach Obama if he once again breaks the law, trashes the Constitution, violates the separation of powers and orders an executive action that grants amnesty. Obama is running roughshod over a Congress that liberal constitutional professor Jonathan Turley called “inert.”

So, do we really need the headaches from a do-nothing, “inert” Congress that is terrified of the media and the President and unwilling to tackle the real problems our country faces?

Let this Congress stay away until after the mid-term elections. Hopefully, the American people will elect a new Congress with courage, common sense and an interest to get to work. We need a Congress to deal with problems, not just go on recess.