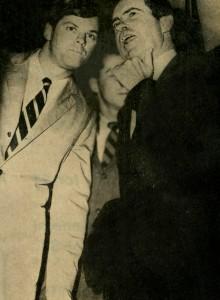 by Jim Brown
Forty years ago this week, Richard Nixon became the first and only president to resign from office.  Those of you too young to remember the events surrounding Watergate missed one of the most riveting episodes of American history.  Nixon survived a number of bitter political fights, but he had always been able to bounce back.  However, it was his own words in secret recordings that he personally authorized in the Oval Office that finally led to his downfall.

Throughout his political career, the 37th President made a number of trips to Louisiana.  Nixon’s first visit to Louisiana was with his wife Pat in 1941, shortly after they were married. “I remember how we were moved by the wonderful food and the good music, but most of all by the warmth of the hospitality,” he often recalled.  He made fast friends with trumpeter Al Hirt and clarinetist Pete Fountain, both of whom he later invited to perform at the White House.

Nixon lost his first bid for President in a close defeat to John F. Kennedy in 1960. Some 10,000 votes could have changed the outcome, and some political observers still feel the election was stolen from Nixon by election shenanigans in Chicago.  Two years later, he tried for a political comeback running for governor of California, but was defeated by then Governor Pat Brown, whose son is the state’s governor today.  Nixon told reporters he was through with politics, and they “wouldn’t have Nixon to kick around any more.”

But rumors surfaced a few years later that he again might be interested in the Republican nomination.  I was class president at Tulane Law School in 1966, and had the chore of arranging speakers.  On a whim, I wrote Nixon asking him to address the Tulane student body.  To my surprise, he accepted.  Over a lite lunch at the Tulane Student Center, he quizzed me about Louisiana politics and asked a number of questions about my background and future plans.  I found him engaging, funny, and quite the dominating figure one would expect of a former Vice President.

I introduced him to the packed crowd, and it was obvious from his remarks that he was running for president again.  He invited my wife to be and me to join him for a Republican Party fundraising dinner that evening, and future governor Dave Treen joined us.  Treen and I both felt like we were listening to the next president.

As the evening ended, his chief of staff asked if I would consider joining the campaign by heading up a Nixon for President group being formed in New Hampshire, the first primary state.  I was tempted, but chose instead to begin a new family and a new law career in the Crescent City.

My only other meeting with Nixon was in July of 1972 at the St. Francis de Sales Catholic Church in the south Louisiana town of Houma.  We both were there for the funeral of Louisiana Senator Allan Ellender. An hour before the funeral, over a thousand people were packed into the street in front of the entrance. Metal barriers had been set up to keep the crowd at bay, and the church was surrounded by state troopers, local police officers and numerous Secret Service agents. It became obvious why there was so much security. President and Mrs. Nixon were to join a long list of dignitaries to remember the Senator.

I had no official invitation, and was just one of the crowd standing on the outside of the barriers. I was a new state senator then, and I hollered out a greeting to a colleague, state Senator Claude Duvall, who was inside the barrier. It was a stroke of luck, because Claude was in charge of the seating arrangements. He graciously opened up the gate, and led me into the cathedral. Half an hour later, the official delegation that had just arrived from Washington was escorted into the church sanctuary.

When the President entered, he was led by the Secret Service to sit directly in front of me.  I introduced myself and reminded him of his visit to Tulane, and the offer to go up to New Hampshire.  He said that I had missed a great opportunity.

Watergate proved otherwise. But he also told me that if I had to be living and working somewhere, Louisiana was one of the best places to be.  He sure was right about that.

"You know, I always wondered about that taping equipment but I'm damn glad we have it, aren't you?"