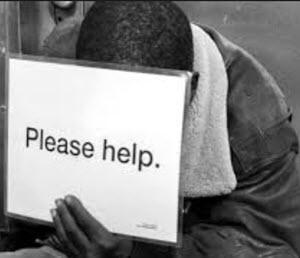 As the City of New Orleans prepares to host the first Saints preseason game on Friday, they decided to finally take action about the growing homeless problem underneath the Pontchartrain Expressway.

This morning, notices were posted warning the homeless that the area would be vacated within 72 hours. The homeless were told to remove all personal belongings as the area was declared a “public health hazard.”

Over the past few months, the number of homeless people living underneath the Pontchartrain Expressway has surged. In response, Landrieu administration has done nothing, until now.

Homelessness has long been a problem in New Orleans. In December of 2011, the major homeless camp at Duncan Plaza across from City Hall was finally disbanded. At that time, a non-profit group, Exodus House, stepped forward to offer housing to some of the displaced squatters.

In May of 2012, Unity of Greater New Orleans estimated that there were about 5,000 homeless people living in the metropolitan area.

Recently, more homeless people have been congregating underneath the Pontchartrain Expressway bringing tents, sofas, bed, and other furniture to give the area a sordid atmosphere of squatters running amok. Not surprisingly, this has created a public health crisis and a public safety nightmare for the citizens of New Orleans.

Psychologists note that the homeless problem is multi-faceted. The nation is suffering through an anemic recovery with low wages and rising costs. More and more people are losing their hosing with no means to find replacement shelter.

The poor job situation is especially difficult for low skilled employees who are facing more competition from an influx of illegal immigrant labor. These Americans have been left out as the economy has changed and technological skills have become essential for so many of our jobs today. Sadly, many of our low skilled laborers do not have the funds for more education or training and are stuck at the bottom rung of the economic ladder.

Another major component to the homeless problem is the mental health crisis in New Orleans and a lack of healthcare facilities to take care of these individuals.

In addition, since Hurricane Katrina, New Orleans has attracted an influx of people from around the world. Included in this mix are people are have been unable or unwilling to find work.

The problems underneath the Pontchartrain Expressway exist in other areas of the city, namely the French Quarter where gutter punks roam freely and accost tourists and locals alike.

With limited police manpower, the homeless are more likely to spend nights on the streets unimpeded by law enforcement officials, who are focused on more serious crimes.

It is sad that it took a Saints game for the Landrieu administration to take action. City officials should have addressed this brewing crisis much earlier.

In 72 hours, it will all be ending, in time for the Saints game. However, in the long run, this move will solve nothing and the long term fix for the homeless problem in New Orleans remains elusive.

After being disbursed from this location, they will eventually find another spot to call home.

Please share if you agree with the opinion;  Also, please provide your opinion in the Facebook box above