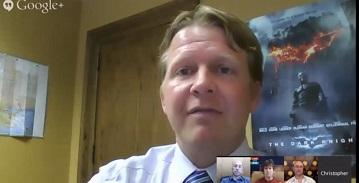 The googlers, one being me, the publisher of this website, questioned via, you got it, a Google Hangout, the Executive Director of Louisiana Entertainment for Louisiana Economic Development, Chris Stelly.

Joining the hangout were Ronnie Bincer, known as the “Hangout Helper” for his extensive knowledge of Google Hangouts and Wayne Nix, a Louisianian, who has created his own hangout hangout video show  focused upon Louisiana food and culture.

Here is part one of the interview

This is Steve Sabludowsky, Bayoubuzz.com.  And today, I think we have a really terrific show, we are going to try to showcase Louisiana entertainment and opportunities with Chris Stelly, who is the Executive Director of entertainment for Louisiana Economic Development and so much really wonderful things going on in that particular area. In addition, we have Ronnie Bincer who is the Hangout Helper for Google Plus, for Google and he is an expert, he is the expert on google hangouts and i think everybody should get to know him. Wayne Nix from Louisiana, and Wayne has a show that he has put together about Louisiana cooking and he's going to explain a little about that also. So, Ronnie and Wayne are going to join me in asking questions and if any comments come in then Wayne is going to share those comments, questions, etc..  So if you have any questions, please go ahead and share them.  You can go to Google Plus, the event page and you can go ahead and just share your questions there.

First off Chris, Chris Stelly, how are you doing today

I'm doing great.  It's one day closer to the weekend.  I'm looking forward to it.  Things are good. Louisiana is certainly abuzz with all things entertainment.  We just wrapped up three or four major pictures in Louisiana, including Jurrassic World, the Next Terminator and the Fantastic Four, so we've got a lot of television going on right now, we have NCIS  New Orleans, which looks to be an excellent addition to that franchise, we've got Salem up in Shreveport, we've got production buzzing around here and there, we have American Horror Story, the Emmys coming up.   So lot is happening on film, in digital interactive media much the same.

Live performance we've got a lot of stuff happening in the world of theater.  As you can see with the lineup at both the Civic and Saengar. Sound recording.  In sound recording our numbers are doubling as time goes by.

If i might, Ronnie, why don't, if you don't mind, why don't you give us an idea what's going on the Google plus, Google hangout world.

In the Google plus, Google Hangout world, we've gt this wonderful tool we're using right now, called Hangouts on Air, it's going to allow us to do a live broadcast and let that be interactive if people want to.  They can ask questions.  And also, Steve you've got right now, the special app they've recently added called the Showcase App.  And what that allows you to do, if you want it to, you can put links, that are live, that are clickable, right on the show kinda like a shopable hangout in a sense where you can, where we can talk about a certain thing, a certain process that we're wanting to promote. and if there's a webpage for that, you can add that in and people while they are watching, they can just click on that and go right over to that.  So, there's some pretty neat things they're adding to the ability to make this live broadcast as well as the video it ends up with evergreen and add value to and lead you into a direction that you want people to go.

First, thanks for letting me be on the show and me and my wife Dawn Nix and a friend of ours Lance Fields from New Orleans got together and we started basically what we do, call "conversation cooking"  that's what we do in Louisiana, people, we go into the kitchen and kind of shoot the breeze. And when we're doing that, we're filming live from my kitchen and we're talking about, not only cookng and the recipes but we're also talking about the culture, the history and we try to promote the people,the places and the product with a little bit of Louisiana humor.

And there's a lot of humor by the way. So, Chris, hopefully, you have an idea about what we're doing in the Google world, we're trying to interface, say, music, video, film, digital media and certainly, I wouldn't call this a live performance as to the tax credits but just curious, how do you feel about this new technology as it relates to all the incredible things that you see going on in film and in everything else.

You know, I think technology is like everything else, it's a double-edge sword. It has certainly allowed more artists access to more distribution channels, whether it's though Youtube or through Netflix, etc, etc to distribute their product online.  Now the one downside of all that is, you do have piracy issues which of course the MPAA is concerned about as well as as are the studios but you also have a question how you create revenue from that--we're in economic development, so the biggest thing about Internet distribution has always been--how do you create a sustainable  model so that our artist can capture more of the money from that. So, I think it is a wonderful tool, to get otherwise relatively unknown artists access to an audience.  And I think that's the beautiful thing about this new technology, now the costs are so much lower to do a film, you can shoot a film, put snippets on Youtube, fully distribute it online.  You can do the same thing with sound recording as evidence by, you know, the wave of mp3's the artists have more ability to control their intellectual property  as well as get it out to a bigger wider audience, I'm just not talking about locally, where in the past you just had to sell your CD out of your trunk of your car, these things, our artists here, now have the ability to get their product out to a global market.  But again, the biggest challenge is how do you monetize it because artists just like everybody else have to eat and I think that's probably always been the question, since the dawn of time.