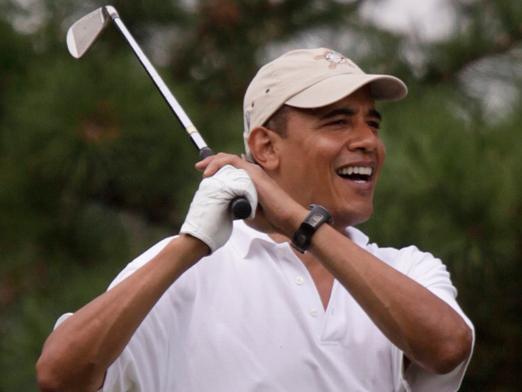 August is usually the month when politicians retire to their vacation homes and relax at taxpayer expense. Congress is paid for a 5-week vacation and President Obama and his family have made it a tradition to enjoy a multi week vacation at Martha's Vineyard, the playground of the rich.

The President loves to stroll the streets of Martha's Vineyard, enjoy ice cream and bike riding. This year, he has been obsessed with golf even more than usual. Since he assumed the presidency, Barack Obama has played almost 200 rounds of golf, no matter what is going on in the world.
During this vacation, he has been golfing while the Ukrainian civil war rages on, the conflict in Gaza continues, the terror group ISIS mercilessly kills innocent Christians and a five day riot raged on in Ferguson, Missouri.
All of this has undoubtedly upset President Obama, so he had to interrupt his good time for an occasion news conference and real work.
Yesterday, he made some brief comments praising his administration for effective action against ISIS in Iraq and blasting the police for their response to the riots in Missouri. Upon concluding the news conference, the President was on the golf course within minutes.
Obviously, golf helps the President relax and he has undoubtedly been stressed recently. This week, Obama not only had to deal with the turmoil overseas and in Missouri, he also was criticized by an unlikely source. He is used to being blasted by Republicans, who oppose his policies, but he must have been shocked to read about the blistering attack from his former Secretary of State, Hillary Clinton.
In an interview with The Atlantic, Mrs. Clinton claimed that the President's feckless response to the civil war in Syria created a vacuum that was filled by Islamic terrorists. The President denied his policies were ineffective and claimed that comments were “horse...”
So, our poor President cannot even relax in peace and has to deal with critics all over the political spectrum. He must realize that Hillary Clinton is running for President and has to distance herself from his failed policies. In a convenient public relations move, on Wednesday night, the President and Mrs. Obama joined Hillary and Bill Clinton at the 70th birthday party of Ann Jordan, wife of super lobbyist Vernon Jordan. Hillary Clinton said she was looking forward to “hugging it out” with the President.
The party must have been a blast for the President was photographed dancing alone at the country club ballroom. Of course the problem with this image is that while the President and company were dancing the night away, Ferguson, Missouri was in flames, police officers were firing tear gas canisters at rioters and innocent Christians were facing a slaughter in Iraq.
Barack Obama is a modern day Nero, golfing and partying while the world burns. This presents an image of a disconnected President who is unconcerned with the crisis at home and abroad. It is no surprise that his approval numbers have been hovering around 40 percent.
Obviously these poll numbers show that Americans are getting tired of a President who specializes in leisure pursuits instead of solving problems such as the border crisis. With a wide open border, we have no idea whether ISIS or another terror group is exploiting this weakness.
There is no doubt that ISIS is already operating in the United States. This week, a picture was posted on the Internet of the ISIS flag in the front of the White House. The other day, a New Jersey man was questioned by police for flying an ISIS flag in front of his house.
This is a threat that the President likened to a “JV” team. Maybe if the President spent less time on vacation and on the golf course, he might be a better judge of terrorist threats.