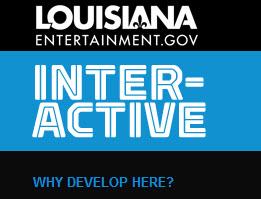 In Part I of a recent Google Hangout webcast, Chris Stelly, Exec. Director of the Entertainment Louisiana Economic Development discussed the exploding Louisiana film industry ranked number one in the world for movie filming due, in large part to a very generous tax incentive program introduced to the state in the early 2000's.  In part II, Stelly explains the Digital Media Interactive program, which likewise offers very attractive tax incentives to software developers for work performed in the state.

Joining Stelly in the webcast, which is below,  are Ronnie Bincer, Wayne Nix and Bayoubuzz Publisher Stephen Sabludowsky.

Sabludowsky: Again, Ronnie, Wayne, if you have any questions, feel free, or any comments, feel free, just to follow up. Let me follow up with that and to say that in terms of monetizing and, not necessarily monetizing Hangouts, but movies and music, live performance. Obviously, those have been around for quite a while. Internet has not. But we also have a digital media tax program, incentive program, interactive media. Why don't you tell us about that? And as you know, I always like to say that I feel that that's my baby, because many years ago, I came up with the idea and helped get it passed to legislature and then help get it expanded, I think, in 2009. So that's something that's real important to me. And my phone just went on.

Stelly: Yeah, yeah, I think, you know, Louisiana is uniquely situated in the world where we have a fully comprehensive suite of incentives designed to attract the entertainment-based industries. The interactive program in particular came around in 2005, like you alluded to earlier, and was really specifically targeted toward video game production. I mean, as far back as 2005, right, we saw a technology that was probably at the apex, at the crest, at its most popular, where video games were console games. That's probably foreign to a lot of the audience nowadays that do these Google Hangouts. But the program was designed and we've been able to have it adapt to not only apply to video games, but to software development, as well. We've used it for online platform, such as iPad applications; however you're developing that technology that has an interactive component to it and into the software development stage where, you know, right now, what's happening around the world, especially in the United States, is the advent of medical software now that HIPAA and the federal government are making all the doctors and all the hospitals and clinics and stuff go online and maintain records. So you know, we're able to capture a big piece of that software development pie that's out there. And you know, Louisiana's program is like no other. We offer a 25% tax credit on your in-state expenditures with an additional 10% for your Louisiana hires. So it's basically an employment tax credit because all your digital interactive development and production are centered around the actual employees. So we're basically a 35% tax credit for your annual W-2 wages, which is a great program. We've seen a lot of things come through our office. It's innovative; it's a program that's been able to adapt with the change in even methods of distribution. So as long as you have...development has to occur in the state of Louisiana. It has to be available to...there has to be a commercial component to a media. You have to offer it to other companies or sell it to other companies, not just for internal use. But it's been a great program.

Bincer: I have a question for Chris. When it comes to interaction, this stuff that we're doing right now: I train people regularly; that's my business; on how to use Hangouts, which is a really interactive tool. Would you think if I were to physically move to Louisiana that my business could qualify for something like that? Because this is a whole new realm of interaction technology, and I just don't know if that fits in to the how you currently define interaction.

Sabludowsky: If I might just add, one of the thing we're seeing over and over, are apps that work with this new technology. So I just wanted to add that to it in terms of, because you're not just talking about, you know, Hangouts, but you're also talking about applications, just like iPad applications, etc.

Bincer: But my question is specifically about this. I run a show, and I also run a training environment, and I teach people how to use the tool that may or may not qualify for an interactive tax credit.

Stelly: Actually, it's easy, Ronnie. It would not qualify.

Stelly: Not to be the harbinger of bad news or anything like that, but the way the statute is developed, there has to be some sort of development component, programming, coding, etc, that has to take place in Louisiana. You would probably be considered a quality control measure or a training measure, which simply doesn't fit within the confines of the statute. Not to say that what you're doing is not important; certainly, everyone needs to understand how to use these tools, but it's not how our program is designed. We really want to get people that are actually doing the coding and the development in the state of Louisiana.

Sabludowsky: And Chris, I thought you were going to say that, which is why I brought up the idea of the issue of the apps. Of course, not to put you under the gun here, but would apps possibly qualify if they're created in Louisiana?

Stelly: Apps not only possibly qualify; they actually do qualify. So we've had some experience. Take the Fantastic Flying Books of Mr. Morris Lessmore; the application that was centered an intellectual property created by Bill Joyce here in Louisiana. They released the short film, which I'm proud to say won the Oscar that year, but they also created an iPad application centered around that intellectual property, did all the development work here in Louisiana, and was ultimately able to qualify for the program. They're proud to say that that became one of the best, the all-time best-selling apps within the Apple store. So it's now in the Apple Store Hall of Fame. So it's pretty cool.

Sabludowsky: So what we need to do, is we need to all the Google developers to come down to Louisiana and to open up shop and to do some work and to recreate the world.

Stelly: If you can put us in touch with all the Google developers around, Ronnie and Steve, we'll be happy to make that pitch to them. But yeah, speaking seriously, we are reaching out to major developers in this space and showing them what we have. But yeah, a company like Google can certainly take advantage of our program. We've got IBM here that's going to take part in some sense. GE Capital, we've got Gameloft, which, of course, creates casual games for the iPad and for the iPod. So yeah, Google would be an ideal client for the state of Louisiana. We'd love to engage with them and welcome them here with open arms. Now Wayne can cook some food for them.

Nix: But I do have a question for you, too. Is there an amount of money you have to spend? I could have sworn I ran across some documentation about a minimum amount of funds, like 30,000 dollars or 100,000 dollars.

Stelly: The DMI program has no minimum spend requirement. However, our other programs, there are minimums set. For film, for example, it's a 300,000 dollar minimum. For sound recording, it's 15,000, but it's also 5,000 for Louisiana musicians, and our live performance, I want to say, is 100,000 or 300,000. So there are minimums, but there's no minimum spending in the DMI program.