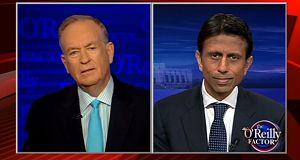 Despite the Times Picayune declaration today that Louisiana is 3rd in the nation in Real Gross Domestic Product since 2005, and despite the Jindal administration crowing about that very ranking, Louisiana is actually light-years away from that lofty national ranking.

In fact, Louisiana is well below the national average for the same time period reported by NOLA.com, the web version of the Times Picayune, not 3rd in the nation.

Not only is Louisiana far behind the United States average since the first quarter of 2005, it woefully trails the national average for the past three years.

However, Governor Jindal and his administration appears to want America to think otherwise.

Here are the facts:

Today, the Governor’s office sent out an email as it always does when it wants to promote positive information praising the administration.

This was sent out by Governor Jindal’s office this morning:

When it comes to the increase in state gross domestic product (GDP) for 2005-2013, Louisiana came out near the top.

The Pelican State saw its GDP increase by 5.4 percent, above the nation's average of 2.8 percent over the period. That shows Louisiana has the nation's third-highest GDP growth rate, according to recent figures released by the U.S. Bureau of Economic Analysis Wednesday (Aug. 20).

Louisiana Economic Development Secretary Stephen Moret said that since the Jindal administration took office in 2008 the state's real GDP growth has been roughly twice as fast as that of the U.S. overall.

"This is not a surprising result given that Louisiana's economy has outperformed that of the South and U.S. overall since January 2008, whether considering job growth, unemployment, GDP growth, or other economic measures," Moret told NOLA.com | The Times-Picayune. "Most importantly, over the next 5-plus years, the outlook for job growth and state GDP growth in Louisiana is excellent."

When I read this article, I immediately felt, no, this is not correct, no way!. Louisiana has been below the US GDP. I felt adamant about this since I had written an opinion column months ago, citing the same BEA government figures and claiming that Governor’s Jindal’s repeated statements that we were doing so well were not only incorrect and in my view, a total skew of the real numbers and the facts.

In my column this spring, Louisiana GDP Facts Jindal miracle or mirage, I had stated:

Which means, during the national recession and post-Katrina recovery, the United States average in 2008 and 2009, scored -.9%.  The Louisiana GDP for those two years was a whopping 9%.  During that period, when President Obama was pushing his stimulus, his automotive and his Wall Street bailout plans, Louisiana's economy was receiving and spending the federal money of which some have called the Hurricane Katrina "bailout" money.

Yet, from 2010 through 2013, the period in which the Katrina money began to drop and the Jindal economic development policies gained shape, the United States averaged 1.18 percent per year while Louisiana has garnered a meager .2% per year.

Although I am not a mathematician, I can count.  In stalk numbers, the US economy has outperformed Louisiana in GNP 29.5:1 over the past three years.  In short, we are "getting skewed" with Jindal's "see how great I am" numbers.

So, how can the facts and the numbers published by Bayoubuzz be so different than those stated by the Times Picayune today and promoted by the Jindal administration?

The answer is simple. They published an erroneous conclusion based upon a government map that did not and does not even come close to supporting support that conclusion.

The map says Louisiana has 5.4 Real GDP. Unfortunately for Louisiana, that number 5.4 represents only the fourth quarter of 2013, and not anything but that. Surely, not the GDP of Louisiana since 2005 or from any year to date since then. 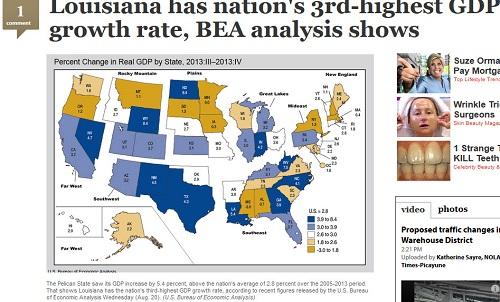 Where did the TP obtain this information? 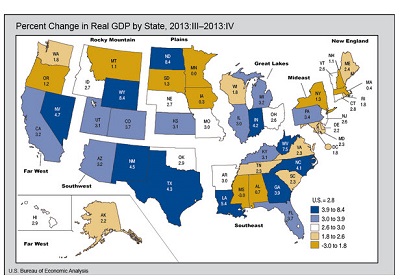 How do I know my figures above are correct? Immediately after I saw the NOLA.com article, I compared those TP numbers with stats on the same BEA.gov government website, saw the title at the top of the map, then contacted the BEA and discussed the Times Picayune article with the media representative Thomas Dail, who reviewed the Times Picayune article and my analysis and agreed that the TP information was not correct at all, that the 5.4 GDP and 3rd in the nation rank was only for the last quarter of 2013.

Mr. Dail, then forwarded the following link to the excel sheet which is shown below which provides detailed annual GDP numbers which this site is reporting above. 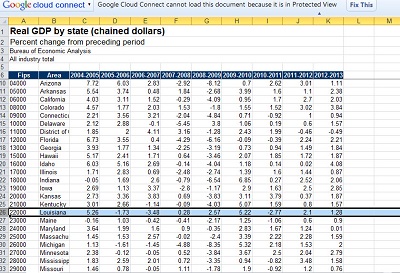 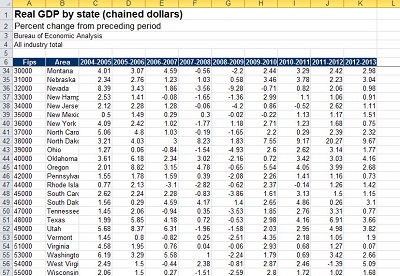 Actually, and interestingly, the GDP under Governor Kathleen Blanco, from 2004 through 2005 was 5.26, better than any time under the Jindal administration and even better than the Katrina bubble years.

Am I pleased that Louisiana is not ranked in GDP anywhere close to as high as the Jindal administration wants us to believe or that the TP has reported? Also, how is Louisiana actually ranked via a vis the rest the nation?

I do not yet know the answer to the second question but obviously, it does not take a Rhodes Scholar to know that if the Louisiana’s GDP is far less than the national average for this time period as shown by the federal statistics relied upon by the TP and the administration, the state surely is not going to be 3rd, or anything close to that and most likely, not even close to the top half, in rank.

Instead, I would hope, as I suggested in my prior column, that Jindal and some members of his administration start to provide real data and statistics about the performance of the administration and not some made-for-presidential-election-BS that Bobby Jindal and loyal propagandist want us all to swallow-- hook, line and sinker.

More in this category: « Kennedy says Jindal fix for 1.2B hole: “trust me”, no consults reductions Kennedy:Edmonson lawsuit needed, Common Core debate ongoing »
back to top