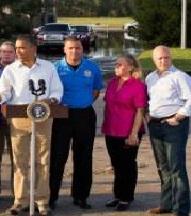 Louisiana United States Senator Mary Landrieu has always been a survivor in Bayou State politics. She’s been successful in four races for the U.S. Senate, but the elections have always been close, and until now, her opponents have never had the full weight of the national republican campaign apparatus behind them. But this time it’s different. Landrieu is in the political fight of her life. She’s under an all-out assault by republican organizations all over the country.

There’s a good reason why so much attention is being paid to this Louisiana election. The stakes are sky high. Which party controls the U.S. Senate may be determined by who wins in Louisiana. The Bayou State’s unique “jungle primary” pushes the runoff election back until early December. Every other state election will have been decided by then. And if control of the senate comes down to one vote, which a number of political prognosticators believe could happen, the Louisiana election will captivate the political eyes of the nation.

Can Landrieu pull it off again? Landrieu’s biggest hurdle is not her two aggressive opponents, but rather a number of problems she has created on her own. The lady is facing a high mountain to climb because of two things: her controversial senate record, and her continuing campaign blunders.

Her political problems were highlighted after she became the deciding vote to pass Obamacare in the Senate, for which she was dubbed “Obamacare Mary,” a yoke Landrieu’s had to carry for legislation highly unpopular in Louisiana. Adding to her burden, she’s been a longtime champion of The Patriot Act -- a distasteful law that allows widespread spying on every American citizen.

She’s received criticism for her vote to tax Louisianans on all out of state Internet sales, a tax increase also highly unpopular back home. Another Landrieu proposed tax would double the security passenger fee – a fee that air travelers would have to pay on each flight. In 2011, she became chairman of the Senate's Homeland Security Appropriations Subcommittee, yet her opponents charge that her leadership on immigration reform has languished as she’s failed to offer any suggestions or legislation to curtail the mass of illegals crossing into the United States.

Landrieu has been a champion of the U.S. Export-Import Bank, which is presently under siege because of allegations of corruption and cronyism. Most recently, her republican opponents are on the attack for her attempts to block legislation that would have imposed human rights sanctions for atrocities in Venezuela.

But aside from her voting record, Landrieu’s bigger problems involve the handling of her politics. In recent years, she’s rarely returned to the state, and is running a re-election campaign orchestrated from Washington, driven by millions of dollars in campaign contributions from all over the country. Last year the Baton Rouge Morning Advocate reported that Landrieu was forced to pay penalties and interest three different years for failure to pay property taxes on her Capitol Hill home, valued at $2.36 million, on time. Just last week, USA Today and CNN reported that Landrieu has flown in private planes on multiple occasions for campaign events paid for with taxpayers dollars, a violation of federal law.

She is also being accused of running a campaign that is aloof from local involvement, with key supporters complaining that phone calls go unreturned. In the northern part of the state, key public officials, including the Mayor of Monroe and the Public Service Commissioner have volunteered to help the Senator get out the democratic vote, but have received no response. Apparently, the entire Landrieu campaign is television driven by out of state public relations firms.

Nevertheless, Landrieu still has a lot going for her. She is the incumbent and has she’s done her share of political favors over the past 18 years. But, at least for now, her campaign has lost any sense and understanding of retail politics. Voters are not happy with incumbency and the Washington insider mentality. Landrieu is making a big mistake by not engaging, relating to, and personally engulfing a constituency that is skeptical and needs some major reassurance.

And yes, the election is not yet over, but Mary Landrieu is close to being on the ropes. She has less than 10 weeks to turn it all around.

“We have met the enemy and they are us.”

Jim Brown’s syndicated column appears each week in numerous newspapers throughout the nation and on websites worldwide.  You can read all his past columns and see continuing updates at http://www.jimbrownusa.com. .   You can also hear Jim’s nationally syndicated radio show each Sunday morning from 9 am till 11:00 am, central time, on the Genesis Radio Network, with a live stream at http://www.jimbrownusa.com.