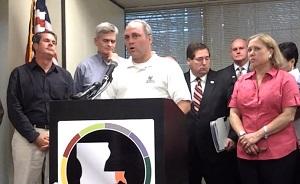 It was a night for incumbents and bi-partisanship.

The endorsement process followed a questions and answer session for each race.
Members of the Alliance for Good Government, Jefferson, Orleans, and St. Tammany Parish Chapters went into caucus. The following endorsements were made:
U.S. Senator- Senator Mary Landrieu
U.S. Representative, 1st Congressional District- Congressman Steve Scalise
U.S. Representative, 2nd Congressional District- Congressman Cedric Richmond Public Service Commissioner, 1st District- PSC Eric Skrmetta
The debate for US Senate featured Landrieu and Tea Party candidate Colonel Rob Maness. Republican Congressman Bill Cassidy did not attend. Rep. Paul Hollis, who previously ran for the same elective position filled in for Cassidy, whose campaign said had a prior engagement.
Both Landrieu and Maness politely responded to questions but took frequent shots at Cassidy’s non-appearance. Maness even brought a wooden duck prop to the debate to symbolize the claims made both candidates that the Congressman has been “ducking” debates.

Members of the organization’s Jefferson, Orleans and St. Tammany Chapters put together questions. Per the organization’s bylaws, the first objective of this group is to endorse candidates. Also per the bylaws “All persons, who are registered voters may submit an application for membership;” however, “no elected officials or family members thereof will be considered for membership.” The Alliance for Good Government is a non-partisan organization with members across the metro New Orleans area.