Vitter championing mobile video to get out the vote for Cassidy, conservatives 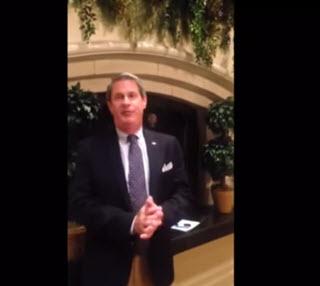 US Senate David Vitter, who mastered the use of digital advertising and promotions for his recent US Senate campaign, is once again leading the pack in another election, in this case, using it to GET OUT THE VOTE for Congressman Bill Cassidy in the upcoming mid-term elections.

Last week, the now-candidate for the Louisiana Governor, Vitter, sent out this email message:

I recorded a quick video last night because I want to get the word out about the importance of voting in this crucial election. This is our chance to elect conservatives like Bill Cassidy, to take back the Senate from Harry Reid and President Obama, and to change the direction of our state and our country. Early voting is already going on, and we need to make sure strong conservatives like you get to the polls. Click below to watch my video.


I need your help to spread this message. There are a couple things you can do.

1)   Forward this email to your friends and let them know why they need to get out and vote.

2)   Donate just $5 to help me promote my short video so more Louisianians can hear my message.

3)   Head to the polls and vote for conservative leaders!

It is up to us to spread the word and to make sure Louisiana stays conservative. We have less than two weeks, and we can’t let this opportunity slip away.


Get out the vote!


P.S. – Your $5 contribution goes directly toward helping me turn the Senate red by encouraging

Obviously, the US Senator is taking advantage of the current US Senate campaign to market his own gubernatorial campaign while framing his message as an opportunity to make Louisiana more conservative.  He is also using a Youtube annotation to create a message to take action, a link to his site which then redirects the visitor to the Secretary of State website to search for polling locations.

Still, Vitter, in using his smart phone, whether it be Iphone or Android,  is displaying the incredibly powerful  and immediate ability to create and disseminate a message "on the fly", while not being overly concerned about the limited mobile nature of a narrow screen and lack of video acuity that a television camera would generally provide.

More in this category: « Landrieu campaign claims Cassidy telling another whopper with ad Too many Louisiana constitutional amendments for one election »
back to top