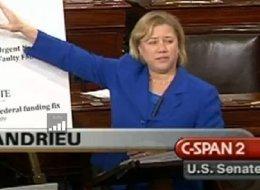 So you could watch the decisive game of the 2014 World Series, some of us watched the desperation dripping from Sen. Mary Landrieu as she tried to say anything to capitalize during the second and final statewide televised debate among competitive U.S. Senate candidates in Louisiana, and it’s unlikely any of that changed the dynamics of a contest moving decisively against her.

When one has now run behind in the heads-up choice between her and her main rival Republican Rep. Bill Cassidy for the past 11 polls, it gets to the point where there’s less concern about how credible accusations are against opponents, who also include mid-major contender military retiree/middle manager Republican Rob Maness, and more impetus to throw out there anything hoping it sticks. But just like a football defense that, in order to stop a high-flying passing offense, begins to blitz more, it opens itself up to getting burned by big plays. And it happened more than once to Landrieu during this encounter.

Thus, she accused both opponents either by action or stated intention of wanting to reduce Social Security benefits, not wanting to pay women equally, being against adequate Coast Guard funding, and, in the ugliest moment, insinuating they were complicit in an America rent with racism that keeps racial minorities from enjoying equal opportunity to achieve. Each time, with degrees of success varying from lukewarm to embarrassing her, the Republicans parried – and, perhaps surprisingly, Maness did so more effectively.

His best riposte came when both he and Cassidy called out Landrieu for picking up support through the use of crony capitalism, using the example of industrialist Donald Boysinger supporting her (including cutting a commercial for her) even as she steered extra Coast Guard vessel business to him beyond what the Coast Guard had requested. She indignantly tried to sell the audience on the facile notion that criticism of her on this basis meant both Cassidy and Maness made light of its duties and functions. Maness then quickly put her in her place by giving just a faint hint that she was saying that about a career military airman.

By contrast, Cassidy showed her up on the Social Security matter, where she said both he and Maness would cut benefits by defining a cut in them as a hike in the retirement age, in that people therefore could not collect as much over their lives. Cassidy reminded the audience that his idea to gradually extend out ages before full benefit collection – following the strategy in the 1980s that took the overtaxed system away from bankruptcy temporarily – to those not yet receiving it meant that this would avoid benefit cuts that assuredly would happen through Landrieu’s strategy of not doing anything. She retorted that she would do something, that being raise taxes on those making a million dollars a year (she didn’t say by raising the cap to that level or begin taxing again at that level and/or by charging a higher rate at that level), to which Cassidy responded that wouldn’t solve the problem.

Given the forum’s format, it’s understandable why Cassidy couldn’t go into details if he had wished; besides the unfairness of her proposal (it’s designed to be an insurance, not wealth redistribution, program that with Landrieu’s idea would mean the wealthy would pay far more into the system than they ever got back), it simply would not come close to making Social Security’s trust fund solvent. The same applied to when Landrieu blurted out the blanket statement that her opponents opposed equal pay for women. Not only was that absurd – Maness had said nothing of the kind and worked for 32 years in an organization legendary for paying people of the same grade (special duty aside) the same wage regardless of sex, race, or creed, and Cassidy also has never said anything like that either nor in Congress sponsored any legislation nor voted for any measure that had that effect – but then Maness dinged her on the pay disparity of men making more than women on her own staff. She sputtered that wasn’t true – but it is – yet she might be able to defend herself by pointing out here were differences in hours worked, specific duties, leave granted, etc. But then she would be using the exact same arguments that defeat her claim that women generally are paid less than men in America, for which she blamed them, a hoisting on her own petard that hopefully Maness and/or Cassidy would have pointed out. Again, however, anything beyond the shallowest intellectual argument was obviated by the rapid-fire format of the forum.

As he had previously, and as he does generally, Cassidy stayed with his theme of pointing out a very few consequences of a Landrieu reelection – her support of Pres. Barack Obama’s liberal agenda most of the time and her ineffective resistance on those few occasions she disagreed with the president – and contrasting specific incidences of these such as her support for the Patient Protection and Affordable Care Act with a very few broad conservative principles about how he would do it differently. Maness continued to make more explicit conservative ideological appeals and threw in a few jabs about his not being a professional politician – although this time he seemed more willing to go tag-team with Cassidy on Landrieu than try to imitate the cemetery duel scene in The Good, the Bad, and the Ugly.

At the same time, Maness continued to show signs that he still wasn’t quite ready for prime time. On the very first question, about possible expansion of military action in the Middle East, he prefaced it by saying Cassidy and Landrieu should be tending to the problem rather than doing that very debate – even though he had criticized them endlessly about not having far more of them. And in his closing statement, he threw in words of wisdom from Col. Nathan Jessup – a fictional stage/movie character who was the bad guy in the play/film A Few Good Men.

Landrieu’s desperation – when you’re in the place she is in, you can’t just wait and hope the frontrunner, Cassidy, self-immolates; you have to become shriller and throw in the kitchen sink, no matter its absurdities – oozed around the scene. Perhaps that contributed to her making factual errors, such as saying she had worked with “six governors” (in reality, only three as a senator and five total as an elected official) and that Medicaid expansion (why that was asked is a mystery; a U.S. senator has nothing to do with state decision-making on that account) eventually for every 10 cents paid in would get back “a dollar” (in reality, only 90 cents).

So, if a winner must be named, Maness wasn’t because, even after a year-and-a-half of campaigning, he still came off as not serious enough, and Landrieu wasn’t as she took too many losses on big play attempts. Plodding Cassidy, again by default, won by staying out of trouble. And thereby maintaining the dynamic that continues to point him to overall victory.

More in this category: « interest in Louisiana politics has lost its shine Louisiana U.S. Senate debate top storylines: Dud, Obama and strong comments »
back to top