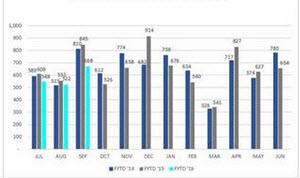 In what might be another slam at Louisiana Governor Bobby Jindal's handling of the budget and the state's assets, Treasurer John Kennedy has penned another OpED, this time warning that the state general fund is running a historically high negative balance just four months into the fiscal year.

"I'm concerned.  This negative balance is evidence that we are spending more than we're taking in.  We've been doing it for a while, but this historically large negative balance demonstrates that it's getting worse," Treasurer Kennedy said.  "In fact, the Department of Health and Hospitals just announced that we are already $171 million over budget in our Medicaid program with eight months to go in the fiscal year."

Attached is a graph of actual general fund month-end balances for the past five years.  The black line for FY14-15 shows the extent of the cash flow problem.

The State Treasurer's Office reported the negative general fund balance and the state's declining cash position on the official statements for an upcoming bond issue refunding and the new general obligation bond issue.  Fitch Ratings Inc., a credit rating agency rating the bonds, said: "In October 2014, the state reported that the GF (General Fund) recorded net revenues that were $140.6 million less than its spent appropriations ... Fitch believes that it is clear that the state's revenues in Fiscal 2014 were insufficient to fund operations in that year ... From the actual results for Fiscal 2014, net GF revenues in support of the budget would need to increase by a strong 5.9 per cent to fund approved expenditures and remain balanced."  The Revenue Estimating Conference has forecast revenues of only 4.4 percent for this year and that assumes that the price of oil will be $97 a barrel. Oil currently trades at $79 a barrel.

"We've had six years of midyear budget cuts.  We've raided the Office of Group Benefits, the Medicaid Trust Fund for the Elderly, the Artificial Reef Development Fund and Lord knows how many others.  We've diverted money from the Tobacco Settlement Trust Fund into the state general fund.  We finished last fiscal year with a deficit.  We're over budget in the Medicaid program.  We have a spending problem, and we need to address it," Treasurer Kennedy said.

More in this category: « Sen. Guillory and Rep. James talk on Engster show, goes to dogs Kate Middleton, William separate lives and all about Harry? »
back to top