Did the Bill Clinton speech at Democratic Convention help or hurt Obama? 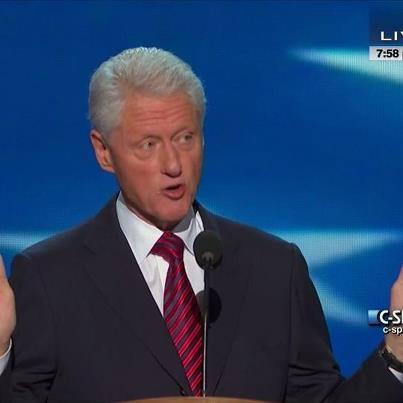 No doubt Bill Clinton’s speech Wednesday night at the Democratic convention in Charlotte was inspiring to those wanting to be inspired by the former president. It was long. Some of it was off the cuff. Others claim it was factually “fictitious”. It might have been his best speech, ever.
Yet, perhaps one of the major questions that should be asked is whether Clinton’s pro-democrats, Obama and anti-republicans and Romney speech helps or hurts the fate of those who need his help the most, namely President Obama and even Hillary.
Here are some comments across the nation about the speech.
How do you feel? Did the speech hurt or help?

Former President Bill Clinton fired up the Democratic National Convention and sparked more than 22,000 tweets per minute, but several million more Americans tuned into football than watched him on television.
Some 21 million Americans watched the National Football League's season kickoff game on NBC between the Dallas Cowboys and the New York Giants on Wednesday night, dwarfing the 7.5 million who watched Clinton's lengthy, humorous and detail-heavy address on the ABC and CBS networks, according to Nielsen data.
Cable TV news audiences were in line with those earlier this week and last week for the political conventions, with a total of about 11.8 million people watching Clinton's address on CNN, MSNBC and Fox News Channel, according to preliminary ratings.
http://in.reuters.com/article/2012/09/06/usa-campaign-media-idINL2E8K6COB20120906

Twitter users were impressed that Clinton seemed to be ad libbing much of his speech, or as younger Twitter user said, he was "freestyling."
Whether Clinton planned to toss in ad libs or just "free styled" is probably just between Clinton and his teleprompter operator, but an analysis of his prepared remarks and his actual speech shows Clinton picked his shots strategically.
Here are five shots that Clinton lobbed in "off speech" with the ad libs underlined:
– Now, there's something I've noticed lately. You probably have too. And it's this. Maybe just because I grew up in a different time, but though I often disagree with Republicans, I actuallynever learned to hate them the way the far right that now controls their party seems to hate our president and a lot of other Democrats
– People have predicted our demise ever since George Washington was criticized for being a mediocre surveyor with a bad set of wooden false teeth. And so far, every single person that's bet against America has lost money because we always come back. We come through ever fire alittle stronger and a little better.
– They beat a Republican congressman with almost a hundred percent voting record on every conservative score, because he said he realized he did not have to hate the president to disagree with him. Boy, that was a nonstarter, and they threw him out.
– And this is important, they convinced me they were honorable people who believed what they said and they're going to keep every commitment they've made. We just got to make sure the American people know what those commitments are
– Folks, whether the American people believe what I just said or not may be the whole election. I just want you to know that I believe it. With all my heart, I believe it.
Clinton's off-script remarks were peppered with pleas like "this is personal to me" and " a lot of people believe this stuff."
http://www.philly.com/philly/news/politics/presidential/20120906_Bill_Clinton__free_styling__largely_ignores_teleprompter.html

Clinton made arguments. He talked through his reasoning. He went point by point through the case he wanted to make. He kept telling the audience he was talking to them and he wanted them to listen. In an age when so many political speeches are pure acts of rhetoric, full of stirring sentiments but utterly devoid of informational value — when trying to win people over to your point of view is cynically assumed to be futile, so you settle for riling them up instead — Clinton’s felt like a whole different thing. In an era of detergent commercials, he delivered a real political speech.He began with an appeal to bipartisanship — a clever and unexpected turn in a partisan speech, one pitched directly to independent voters in their living rooms. “Nobody’s right all the time, and a broken clock is right twice a day,” he said. “And every one of us and every one of them, we’re compelled to spend our fleeting lives between those two extremes, knowing we’re never going to be right all the time and hoping we’re right more than twice a day.” Then he pivoted to attack: “Unfortunately, the faction that now dominates the Republican Party doesn’t see it that way. They think government is always the enemy, they’re always right, and compromise is weakness.”

I do think the delivery and pacing were a bit slow. I do think he shined best when either beating up the GOP, which he clearly enjoyed, and waxing poetically about the nation. He seems most off when he defended Barack Obama.
The speech was a solid Clinton speech that plays well to the crowd, is personable, is so freaking long, and is funny. But there is a serious problem in the speech.
Bill Clinton asked the crowd if they were better off than they were four years ago and they all cheered back “yes.”
That was not wise. The Romney campaign and outside groups are going to use that. The Democrats, trying to paint the GOP as out of touch, are increasingly out of touch or just denying reality. That’s going to hurt them.
Bill Clinton, in that one moment, undermined Barack Obama’s whole re-election effort.
http://www.redstate.com/2012/09/06/my-take-on-bill-clintons-speech/

WHAT DO YOU THINK?  TELL US BELOW?