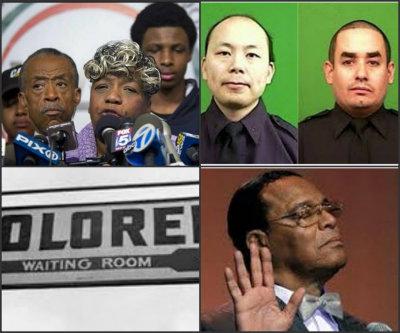 What is the condition of “Race in America” now that the two New York police were gunned down after conflicts involving two young black men and two white cops, one incident in Ferguson Missouri and the other in Brooklyn New York?

That was the issue discussed today on the the Bayoubuzz-WGSO Radio Google Hangout.

The conversation is always interesting when Jeff Crouere and Stephen Sabludowsky talk politics on the hangout every Tuesday morning.  Today was no difference.

WGSO is a conservative talk radio station and Jeff Crouere is the morning host.  Sabludowsky is the publisher of Bayoubuzz.com.

At issue on the radio show-hangout was race in race conditions in Louisiana, Brooklyn and around the country, who is to be blamed.

Caller Liberal Dan started the fireworks urging that the nation not forget the horrors of Jim Crow and Slavery.  Crouere and callers objected claiming that times have changed since then.

Caller Phil the Patriot blamed President Obama, Louis Farrakhan and Al Sharpton for inciting blacks to engage in violence.  Crouere believes there should be an investigation to see the relationship between the recent shootings in New York and conditions in Ferguson and the two black activists.

Sabludowsky stated his dislike for both Sharpton and Farrakhan but felt there was a risk in casting blame, that liberals have blamed Fox News for various incidents and that targeting both of these two black leaders, without any specific evidence, was not fair.

Watch part I of this hot controversy captured on video during the Google hangout.