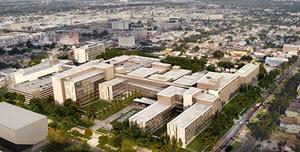 The Department of Veterans Affairs (VA) is pleased to announce the appointment of Fernando O. Rivera, MBA, FACHE, as the new Director of the Southeast Louisiana Veterans Health Care System (SLVHCS), effective January 11, 2015. Mr. Rivera will oversee the delivery of health care to more than 66,000 enrolled Veterans in 23 parishes of Southeast Louisiana.

Mr. Rivera is also responsible for the opening of a $1 billion replacement VA Medical Center in New Orleans that will serve as a model for health care of the future and set the standards for patient-centered care, flexibility and sustainability. The state-of-the-art facility will authentically reflect the culture of the region and be the cornerstone for the emerging biosciences industry in Louisiana. It includes a 200-bed tertiary care regional referral center that is projected to serve 70,000 enrolled Veterans and is designed to meet the full array of VA missions: health care to America's Veterans, medical education, medical research and national emergency preparedness & response.

SLVHCS employs approximately 1,300 employees and provides primary and mental health care at all sites and specialty care at selected sites including eight community based outpatient clinics in New Orleans, Baton Rouge, Slidell, Hammond, Bogalusa, Franklin, Houma and St. John Parish. SLVHCS is affiliated with Tulane and LSU medical schools and is designated as one of nine VA Emerging Centers of Innovation for patient-centered care. SLVHCS is a recognized leader in several unique clinical programs and nationally recognized programs, including Home Based Primary Care, Hospital at Home, Health Care for the Homeless, and the Community Resource and Referral Center, which is the first in the country to integrate federal, city and private sector resources to serve both homeless Veterans and non-Veterans. SLVHCS was also recognized by the National Alliance for Ending Homelessness for being a leader in ending Veteran homelessness.

“We are excited to bring Mr. Rivera on board as the new director of the Southeast Louisiana Veterans Health Care System. His sound leadership qualities and proven experience will be valuable assets for the facility, the employees, volunteers and, most importantly, for the Veterans we are honored to serve,” said Gregg Parker, MD, MHA, Acting Director for the South Central VA Health Care Network.

Mr. Rivera earned his bachelor’s degree in Civil Engineering and a master’s in Business Administration from the University of New Orleans. He is committed to community service on many levels. He is an honorary member of the Vietnam Memorial Wall Washing Crew and has received the Military Order of the Purple Heart Distinguished Service Award, the Marine Corps League Distinguished Service Award, and the AMVETS Leadership in Service Award. He also served as Assistant Scout Master in Troop 1444 of the National Capital Region Council of the Boy Scouts of America.