A Christmas wish: Thawing the DC and the American political landscapes 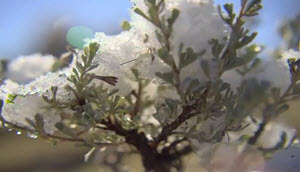 It is the Christmas holiday season throughout the world particularly in Washington DC where the political temperatures are always red-hot with anger and with communications between the two major parties, the Republicans and Democrats, always ice-cold.

The Republicans now control Congress.  The Democrats maintain the executive branch hegemony with Pres. Barack Obama at the helm, as president of the United States.

The question becomes whether or not the Republicans and Democrats are able or even want  to work together to tackle some of the major issues this nation faces.  It might be very difficult to make those hard choices, given an upcoming presidential election in just two years.

Barack Obama is now a lame-duck.  The tea party insists upon moving the Republican Party in a right-wing direction.  The Democratic Party has only one major Presidential candidate, Hillary Clinton who is considered by some as a polarizing rather than a moderating force.

While the Democrats are not as divided, to date, as much of the Republicans are, there’s no guarantee that Hillary Clinton or the Democrats will be able to win any of the branches of government in 2016.

So what should the people to do as politics has become a blood-sport, the political parties rarely compromise with one another, and the party extremes make most of the noise drowning out the silent middle majority?

Those are the issues that went through my mind on Christmas day when I decided to make this very short video:

DO YOU BELIVE THE PARTIES WILL WORK BETTER DURING THE IMMEDIATE FUTURE?  Talk about this issue, below

More in this category: « Blame Al Sharpton, Farrakhan and others for New York cop killings? Steve Scalise, David Duke and the gotchas »
back to top