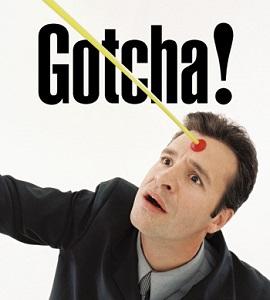 The gotcha is the American political game.  A quite popular one in Louisiana too.

Today, we find one of the most popular elected officials from Louisiana in boiling hot “gotcha” waters.

Steve Scalise, Congressman and Majority Whip, the third most powerful person in the lower house, is the “gotched”.

Partisans from the right and the left are fighting the latest war of the gotchas.

Scalise has acknowledged speaking to a group that was associated with David Duke in 2002, Euro.  That group was another one of the Duke groups formed to preach anti-black and anti-white philosophies.

Scalise also said he does not remember giving the speech.

Those on the right claim there is no issue, just a Democratic liberal slam-job being pushed by local and national media groups and donkey-insiders.

Those on the left claim Scalise is joined at the hip with far-right racist organizations, thus, he should not be House Whip.  Some even are claiming he should step down from Congress and do a Bob Livingston post-scandal.

I feel confident some Republican Congressional leaders want this matter a million-miles behind them.  Their party is claiming a new start, one with a bigger tent.  The third-ranked House official having Duke on his shoes would hurt that profile.

The news channels are breaking stories and dredging up the ghosts of racists past.

This is what we now know based upon media reports:

As per the Washington Post, Scalise was close to the top David Duke political point-person, Kenny Knight.  According to Duke himself, Knight kept Scalise informed about Duke’s issues.

Scalise said he gave numerous speeches at that time about the same issues government waste, slush funds, in this one related to HUD.   However, he does not remember that speech at the Landmark Hotel in Metarie, a suburb of New Orleans.

So, putting aside the rhetoric of many from the far-left and the far-right who use controversies as a sport, here are the issues I see at this time:

Did Scalise have prior knowledge about the Duke-related connections to Euro?  Even assuming he knew about the group’s purpose, should that cause Scalise to be disqualified from his Whip position?

At this point, based upon the information before me, there is maybe some evidence that Scalise might have known the organization’s background, but the evidence does not preponderate against him.  Claming he should have known does not mean he knew.  Guilt by association does not do it.  Much more information, would be needed to conclude that more likely than not, Scalise knew.   A shipload of details would be needed to conclude that he actually knew.

How would we get more details?  Well, here are some questions I have.  Who invited him to the event?  Was it Kenny Knight or someone else that was publicly associated to Duke?

Then, there is perhaps the larger issue—assuming he knew about the group’s purpose, should that cause Scalise to be disqualified from his Whip position?

No.  This event was twelve years ago.  Scalise is conservative but so far, there are no skeletons of racist connections.    I have known Scalise for roughly 20 years.  I met him when he called me about attending an event at my synagogue about a welfare reform forum I headed.   Did he have an interest in issues related to race?  Probably.  Enough of an interest to attend an event about welfare reform given on a Sunday morning at a Synogogue.  But, there are no records that he has uttered the N-word, that he has belonged to any of those fringe organization, that he sold anti-black or anti-Jewish books out of his house, like Duke did.   African American Congressman from New Orleans, Cedric Richmond has said there is not a racist bone in Scalise’s body.  to me, that says a lot.  Personally, I have no reason to believe there is or there ever has been a racist bone, muscle or ligament.

The decision would also be up to the Republican House leadership, not us.  They need to decide if Scalise is too much of a liability for a new House trying to present a different image from that of the past.

Should we conclude this is liberal dirt being thrown at a top Republican leader?   Not really.  True, the story originated from liberal sources.  So what?  Instead,  how about our keeping an open mind and gather more facts, not automatically dismiss or accept them because they impact our partisan political views of the world.

There is, however, one issue I believe to be important--does Scalise remember the event?  Scalise has told the media that he does not remember the event.   Ok.  I accept him at his word.  But, i have questions nonetheless.  Questions such as how many times did he speak at the Landmark Hotel?  When did Duke’s speech take place?  Duke’s address was transmitted by new technology video conferencing.  Did Scalise see it?  Did he know Duke spoke at the event?  Was Kenny Knight at the event?

Logic and our own past experience tells us that this would have been an event he would now recall. While i accept him at his word, my gut feeling is he should have remembered the event.  We know he admits that he spoke to the group.  How could he remember his speaking at the event and not remember the event itself? There are questions, but, so far, no answers.

There are plenty of questions we should ask about some of our elected officials, not just Scalise.  Questions such as who made Mary Landrieu’s chartergate accounting errors?  How did those occur?   Questions such as what work did Bill Cassidy actually do for LSU over the past four years and did he double bill?

Am I a part of the gotcha game?  Perhaps.  But, there is nothing wrong with asking questions about the people we send to Washington DC or Baton Rouge, regardless as to whether they wear an R or a D on their sleeves.

More so, asking legitimate questions about elected officials even those we like is not just a sport, it is a duty.  So are answering the questions, when asked.

More in this category: « A Christmas wish: Thawing the DC and the American political landscapes Louisiana’s Steve Scalise in liberal media crosshairs »
back to top