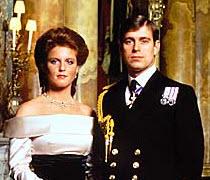 Listen! That is the sound of Sarah Ferguson’s very expensive Rossignal skis shooshing down the powdery, slipper slopes of Verbier, Switzerland.

Sarah Ferguson, the disgraced but constantly re-invented Duchess of York and ex-wfe of Britain’s Prince Andrew, now owns a very nice ski chalet in Verbier, where she used to shoosh down the slopes in her pre-royal days with Paddy McNally, a very wealthy entrepeneur who owned a nice ski chalet, in Sarah’s go-go, pre-royal days. http://www.dailymail.co.uk/news/article-2904085/Andrew-buys-13m-ski-lodge-Never-mind-sex-slave-scandal-Prince-Fergie-snap-snow-palace.html.

Sarah says she wanted to marry Paddy, a millionaire. Sadly, though, there was an impediment to Sarah and Paddy’s proposed marital union.

Or call it, “Paddy’s functioning brain.”

Because around Sarah Ferguson, it’s not enough to just have a brain.

One needs to have a functioning brain so as to stay a step or two ahead.

Paddy has reportedly stayed friends with Sarah, and generously shared his own Verbier ski chalet with her a while back, but that impediment to marriage with Ferguson still seems to persist. http://www.mirror.co.uk/news/uk-news/sarah-ferguson-set-for-17000-a-week-snowy-1502791.

Which brings us to Sarah’s next relationship, and marriage to Prince Andrew.

Anyway, Sarah’s relationship with Paddy went off-piste when the late Princess Diana hooked Sarah up with Andrew, who had no impediment. http://www.people.com/people/archive/article/0,,20092824,00.html.

Or call it, “Andrew’s functioning brain.”

Except that, like I said, Andrew apparently doesn’t have one.

So, no impediment present! The marriage was said to have happened really fast. http://www.vanityfair.com/society/features/1986/06/jolly-romance-198606.

Now, you’d be thinking that a man without a functioning brain, well, how can that happen? How does he live?

That’s what courtiers are for.

But even if he didn’t have any courtiers, Prince Andrew doesn’t require a functioning brain because that’s not the body organ that Andrew uses to think with.

Andrew uses another body organ for his thinking.

That is why he ended up marrying Sarah Ferguson in the first place.

It’s a resort in Thailand.

I am not cursing, nor am I talking about how Prince Andrew was recently accused by a woman of having statutorily raped her when she was an underage teenage sex slave, groomed to romp with the rich and powerful by a notorious financier and his alleged moll procuratrix.

No. “Phuket” is not the act, silly. It’s the place where the underage teenage sex slave says she went to sexually service Prince Andrew.

Oh, look it up, for heaven’s sake!

Weirdly, “Phuket” is also where Sarah Ferguson took off with her two toddler-aged children and their infamous bald Texas “uncle” while Sarah was still married to Prince Andrew. Supposedly, Sarah had to take her children and their bald “uncle” somewhere to escape the hoards of evil paparazzi and the meddling men in grey suits, and Phuket is just such a place where one can get away and...and...oh, Phuket!

Sarah took her journey with the bald Texan uncle to Phuket https://books.google.com/books?id=KtwWwEHRf6sC&pg=PA389&lpg=PA389&dq=sarah+ferguson+%26+john+bryan+%26+thailand&source=bl&ots=XuHToueEIH&sig=s0pUrsHlEUkfSF5MsWyHyaHrZTY&hl=en&sa=X&ei=Xqq2VLqkKoHcggTXzIDABA&ved=0CFQQ6AEwCw#v=onepage&q=sarah%20ferguson%20%26%20john%20bryan%20%26%20thailand&f=false before Sarah was snapped, lounging topless in the south of France, while her personal protection officers snoozed in the shade, her toddler daughters splashed in the pool, and the bald, Texan “uncle” sucked all the poison out of a snake bite on Sarah’s toes. http://www.thetimes.co.uk/tto/news/medianews/article3538467.ece.

I mean, I understand where you may be coming from, if you have a Prince Andrew-like thinking body organ and someone says to you, “Phuket.” A resort in Thailand is not the first thing that pops up.

I mean, pops into your mind.

O wherever it is that you do your thinking.

But, yes, Phuket is the place where royals go when they want to....want to....

I mean, please stop interrupting me!

Anyway, Phuket is also where Monaco’s Princess Caroline’s truly royal husband, Prince Ernst August of Hanover, who is Prince Andrew’s cousin, was photographed a while back swimming with a sexy supermodel. http://www.dailymail.co.uk/news/article-1241265/Princess-Caroline-Monaco-split-husband-pictured-woman.html.

Or maybe it was just a woman who looked like a sexy supermodel.

No less an authority than the Croatian Times reported on it, so I know that it must be true. http://croatiantimes.com/?id=8178-newentry.

Listen, if you keep asking me “where,” I’ll have to stop writing because this is a family newspaper, my friend.....

Anyway, we need to move from the white, sandy beaches of Phuket to the white snowy slopes of Verbier where Prince Andrew was staying last week with ex-wife Sarah Ferguson and their two, now grown, daughters, when the news broke that Prince Andrew was named as Phuketing an underage....

Now, you’ve got me doing it!

Anyway, British news reports now say that the always-broke Sarah and Andrew now co-own their new Verbier skiing chalet, and just in time for Sarah to go on television to talk all about her dieting. And the new juicer she’s hawking which she claims helped her lose 55 pounds. http://www.telegraph.co.uk/news/uknews/theroyalfamily/11343404/Sarah-Ferguson-pauses-from-juicer-promotion-to-defend-Prince-Andrew.html.

And this is qualitatively different from the last time we saw Sarah Ferguson on television a few years ago, which is when she was explaining to Oprah a video showing how she scooped up a suitcase full of cash as a $65,000.00 down payment on a million dollars for giving a businessman “access” to Prince Andrew, who was then representing the Crown in a British trade delegation. http://www.theguardian.com/uk/2010/may/24/feel-sorry-for-sarah-ferguson. Fast forward to the more recent TV appearance.  By the time the cameras rolled on Sarah talking about her dieting and her magic juicer, the news that the former teenage sex slave had identified Prince Andrew as one of her many powerful masters was hitting the news, and so Sarah used her diet television time to defend Prince Andrew, talk about what a great guy Andrew is, a wonderful father and a superb ex-husband and a man with a “humongous” ah....uhm....

Honestly, I forget what Sarah Ferguson says is so “humongous” about Prince Andrew as soon as she said the word, “humongous.” http://www.telegraph.co.uk/news/uknews/theroyalfamily/11342915/Prince-Andrew-sex-abuse-claims-Hes-a-humongously-good-man-says-Duchess-of-York.html.

My thinking organ must have just stopped.

Before they got married and were still speaking in lovers’ code, Sarah used to call Andrew “Biggles.” http://articles.sun-sentinel.com/1986-07-16/features/8602110710_1_polo-manager-fergie-argentine-polo-player.

I think it’s an affectionate way of saying “Big.” As, in, “Humongous.”