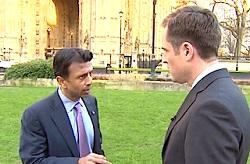 In the four years of our existence, LouisianaVoice has poked fun at, criticized, questioned and challenged Gov. Bobby Jindal on a number of issues and finally, it has come down to the harsh reality that forces us to say what we have refrained, out of respect for the office, from saying thus far:

Bobby Jindal is a fool.

Of course we’re going to get some push back for making such a disrespectful comment about the man elected—twice—to be the chief executive officer for the State of Louisiana. Yes, we’ve called him silly and an embarrassment in the past, but his performance in London goes far beyond embarrassing.

His little tantrum at the National Governors’ Conference luncheon a year ago was an embarrassment to Louisiana; his performance in London yesterday evoked memories of Wisconsin Republican Sen. Joe McCarthy’s claim in Wheeling, West Virginia on Feb. 9, 1950, that he had a list with the names of more than 200 “known communists” employed by the State Department.http://www.history.com/this-day-in-history/mccarthy-says-communists-are-in-state-department

A little background on the Henry Jackson Society is in order here.

Created in 2005, HJS purported to offer a forum for those who believed that any form of totalitarianism required a hardline response—either diplomatic or military.

The HJS Associate Director is a man named Douglas Murray, who also is a columnist for The Spectator and Standpoint. The Spectator, a conservative magazine is Britain’s oldest continuous publication, dating back to 1828 and owned by David and Frederick Barclay. The lesser-known Standpoint was founded in 2008.

Much like their Republican counterparts in the colonies, the Barclay brothers, who also own the London Telegraph, have been accused of avoiding taxes by placing their assets under the ownership of offshore companies and controlled through trusts.

But back to HJS Director Murray, who in March of 2013 wrote an article inStandpoint in which he lamented the fact that “white Britons” were in the minority in 23 of London’s 33 boroughs (this is starting to sound eerily familiar).http://standpointmag.co.uk/node/4868/ful

Concern over the growing divisiveness of the strident organization was such that two months later, the Guardian editorialized that Britain’s Labour Party should cut ties with HJS. http://www.theguardian.com/commentisfree/2013/may/20/labour-cut-ties-henry-jackson-society

Fast forward to January of 2015 and Louisiana’s governor, who has problems back home sufficient to keep him in Baton Rouge, i.e. a budget deficit that grows daily, deep cuts pending for health care and higher education, controversy over the proposed open burning of 15 tons of munitions in Minden, crumbling state infrastructure, looming $180 million bill from Medicaid/Medicare over his hospital privatization deal, and a fast-approaching legislative session at which hard decisions will have to be made. Instead, he chooses to traipse off to London to give an inflammatory speech chock full of inaccuracies and misconceptions.

Ostensibly on a state-sponsored economic development trip (meaning taxpayers pick up the tab for his travel, lodging and meals as well as his support staff and state police security detail), he nevertheless manages to squeeze in an address meant to appeal to his rabid right wing supporters back home as he continues his quest to at least show up in David Letterman’s Top Ten List of Why Bobby Jindal Never Shows Up in the Top Ten List of GOP Presidential Hopefuls. The sad truth (for Jindal, that is) is that he doesn’t even rate a mention in any such Letterman list.

So, what, exactly, did he say that registered an 11.2 on the 10-point Richter scale of Political Absurdities?

Only that there were areas in Europe where non-Muslims are not allowed and radical Islamic law is allowed to override local law. He calls them “no-go zones.”

But when he said, “Non-assimilationist Muslims establish enclaves and carry out as much of Sharia law as they can without regard for the laws of the democratic countries which provided them a new home,” Jindal got it all wrong. When he added, “It is startling to think that any country would allow, even unofficially, for a so- called ‘no-go zone,” he got it all wrong.

He got that all wrong, too.

That’s all wrong as in Joe McCarthy’s outrageous—and unsubstantiated—claims that ultimately hastened his political demise.

When challenged by CNN, Jindal was undaunted: “I think your viewers know absolutely there are places where the police are less likely to go. They absolutely know there are neighborhoods where they wouldn’t feel comfortable.”

When asked by CNN if that was because of crime and not because of a concentration of Muslims, our governor said, “This isn’t a question.” He stuck to his guns, saying the left “wants to make this into an attack on religion and that’s not what this is. It’s absolutely an issue for the UK, absolutely is an issue for America and other European and Western nations.”

He “absolutely” repeated his “no-go zone” claims, throwing in a few moreabsolutelies in the process, later in the day during an interview with CNN’s Wolf Blitzer. https://www.youtube.com/watch?v=kEjlHY2caIs#t=48

Jindal even managed to evoke the “American exceptionalism” claim in the Blitzer interview—while standing on a busy street corner….in London, no less. The only thing absolutely missing was a court jester’s hat for Jindal to wear for the CNN interview.

The problem is he got his information from Faux News which later issued corrections that there was “no credible information” that such “no-go zones” exist in France or Europe.

Lest one think his London speech was not “political,” Jindal even managed to slip in attacks on Hillary Clinton, apparently on the supposition that she will be his Democratic opponent in next year’s presidential election (insert chuckles, chortles and guffaws here).

The Democratic National Committee (DNC), fully cognizant of his budget problems back home in Louisiana, was quick to criticize Jindal, saying he was “just embarrassing himself now” and that he is “very interested” in being president but not so much in governing.

But we disagree with the DNC; he long ago transcended embarrassment. He embarrassed himself many years ago when he insisted on dropping his Indian first name (Piyush which, by the way is still his legal name, calling into question the legality of all documents signed as “Bobby”) in favor of adopting the name of a character on The Brady Bunch sitcom. (We still say it was his good luck that he wasn’t a fan of The Beverly Hillbillies: We just don’t believe Jethro Jindal would’ve caught on.)

He embarrassed himself when he wrote an essay for the New Oxford Reviewentitled “Beating a Demon: Physical Dimensions of Spiritual Warfare” about his supposed exorcism of a female classmate at Brown University.

He embarrassed himself when he gave that awful response to President Obama’s State of the Union address in 2009.

He embarrassed himself when he insisted against all expert engineering advice to the contrary on building those $250 million sand berms in the Gulf of Mexico in an unsuccessful attempt to stem the flow from the BP Deepwater Horizon oil spill onto the Louisiana coast—unsuccessful because the berms washed away in a matter of days, sinking tens of thousands of dollars of cranes and bulldozers with them.

He embarrassed himself when he, a Roman Catholic, went to all those Protestant churches in north Louisiana during his first term to speak about his “born again” conversion to Christianity—while aides were passing around forms for congregation members to complete with their names, addresses, phone numbers and email addresses for future political contribution solicitations (it’s illegal to solicit campaign contributions in the church itself).

No, he didn’t embarrass himself this time. Oh, that he had only limited the damage to embarrassment.

Instead, he showed himself to the world to be the fool he really is and in the process, made the citizens of this state who twice elected him, appear as hysterical, hate-mongering David Duke and Joe McCarthy disciples of demagoguery.

And for that, we should all be embarrassed—or worse, humiliated.

More in this category: « Narcissist Jindal fiddles while Louisiana smolders Louisiana governor hopefuls on road to highway funding uncertainties »
back to top