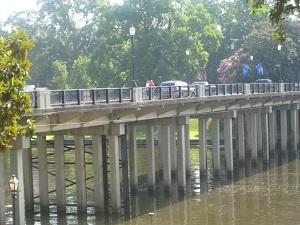 Like everybody else, putative Louisiana gubernatorial candidates struggled with offering solutions to the state’s tremendous roads and bridges backlog of $12.3 billion, if their discussion of this topic at a forum designed for that purpose conducted last week indicates anything.

As the state makes little headway on this amount and seems slowly slipping behind in maintenance as well for roads, the issue has grown in prominence. This year, the state had allocated roughly $925 million in its capital outlay budget for roads, or about half of all total capital outlays, most coming from cash generated from bond sales. This upcoming year the figure predicted is $649 million, which doesn’t seem likely to reduce that wish list.

This total can be a bit deceptive, because little bits and pieces of capital outlay requests can be found strewn through the state’s operating budget as well. The largest portion is extra compensation beyond legal requirements that the state gives to parishes for roads, around $16 million. With the $60 million siphoned from the main funding mechanism for roads construction, the Transportation Trust Fund, to pay for operating expenses of the State Police, together these could reach the goal of over $70 million a year for maintenance if kept for that purpose.

Of course, this does not address the backlog and the $60 million portion creates an extra problem, one which gets at the heart of any attempt to reduce the backlog: beyond a certain point, the state must use cash rather than indebtedness to fund capital outlay. That’s because of the statutory requirement that the state have as debt at most 6 percent of forecast revenues. Only so many bonds can go out for that amount, and so anything in addition to that would have to come from cash, or by cutting back on other capital outlay requests not related to roads. So it all goes back to higher revenues, which either provide more free cash to eat at the backlog, or raises the amount available for debt.

One option could change the law, by jacking up the limit (when passed in 1993, state debt exceeded 13 percent of revenues and the law brought that down gradually). However, this only would push the problem almost literally down the road, for higher future debt means higher future payments which then eat into free cash available for roads or other things. With the state already facing a cash crunch, unless policy-makers want to gamble that revenues grow more quickly over the next few years – keeping in mind that low interest rates that make borrowing attractive now may well rise with the rate of revenue growth which creates inflationary pressures that drive up the operating costs of government at a faster rate – this could put the state operating budget in the future in worse shape with this extra cost.

Another would amend the Constitution and change statute to allow money in the Budget Stabilization Fund to go towards capital outlay. But that not only would be just a one-time fix that might address one twenty-fifth of the backlog, it also would subvert the intention of the BSF, which is as a savings account to help out the state when short on operating expenses.

Raising fuel taxes also can serve as an option, either using the current per unit rubric or by charging a percentage of total sales value (even as falling oil prices has made this much less effective as a revenue-raiser). Among the gubernatorial candidates, that seemed to get short shrift, with the aspirants acknowledging with diversion of those funds for operating expenses currently the public might not trust a tax hike. A 2010 survey seems to bear out that thinking, as only 10 percent of respondents supported the idea, but that increased to 55 percent when told the proceeds only could go to construction.

If increasing revenues in some fashion seems not politically possible nor wise, only one alternative exists to address the backlog: better prioritization. As more than one candidate pointed out, the system that establishes what gets funded when has become more determined by politics than by actual need.

Presently, members of the Transportation, Highways, and Public Works Committees of each legislative chamber conduct hearings across the state from which they draw input to recommendations made by the Department of Transportation and Development, then deliver the vetted list, called the Highway Priority Program, to the Legislature which may not add or delete projects. While the decisions for inclusion can reflect political factors, that the Legislature can move projects in priority – few not already started actually get funding, so getting them in the priority pipeline is the key – really can bring politics into play.

With prioritization more accurately reflecting need, then perhaps the backlog would not be as great as less worthy projects do not get proposed, or at least more important things get done more quickly and do not fester. Yet unaddressed by the candidates was how to change this system to accomplish this presumed depoliticization.

Thus, because of these dynamics, no one at this forum really came up with any tractable ideas to steer more money to roads construction without disrupting the budget now or in the future. The state awaits them or anybody else to come up with something, unless Louisianans are ready and willing to embrace a tax increase.

More in this category: « Jindal fools no one but himself with London "no-go zone" embarrassment Baton Rouge, New Orleans in top 40 cities for Police Spending ROI »
back to top