Obama's State of Union snoozer, a hit in Iraq 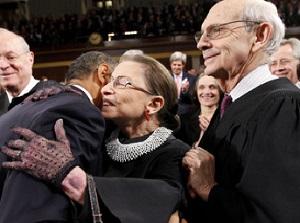 Who can blame Supreme Court Justice Ruth Bader Ginsburg for falling asleep during President Obama’s 70 minute snoozer of a State of the Union speech?

Surely millions of Americans either fell asleep or turned off the President as his gave his usual speech, filled with a laundry list of liberal initiatives. In his speech, Obama did not acknowledge there was a Republican Senate and failed to recognize the stunning defeat his party suffered last November.

He acted like his liberal policies were not only successful, but popular throughout America. In fact, the President suffered through his worst year in 2014, with an average approval rating of only 42.4%, according to Gallup. The reason he is unpopular is because his policies do not work. In a new Fox News poll, 64% of Americans believe the country is still in a recession and the Real Clear Politics poll average shows that only 32% of Americans believe the country is going in the right direction.

In his speech, the President barely mentioned Obamacare and for good reason, it remains unpopular and unworkable. He did attempt to take credit for lower gasoline prices, the declining unemployment rate and the country’s economic growth during the last quarter. However, Obama failed to mention that the labor force participation rate was at its lowest point since 1978 and that fewer Americans are working today than were working when the President took office. To make matters worse, the average work week is stagnant and the take home pay of Americans is lower than it was when the President took office.

Among the Obama laundry list offered during the speech were freebies such as government paid tuition for community college and enhanced maternity leave. The President also claimed that the minimum wage should be increased to $10.10 per hour, saying that the current minimum wage is too low for Americans to survive. Of course, he is right, families cannot survive on the minimum wage, but it was not created as a way to raise families, but to give Americans an entry level position as they joined the workforce. Raising it will only force employers to trim positions and throw more people out of work and into government assistance.

Like a good socialist, President Obama loves government programs and giving Americans government assistance. Sadly, these measures, which should only be used as a safety net, are being used as a way of life for millions of Americans.

On foreign affairs, Obama came across as completely delusional. Even Andrea Mitchell of MSNBC said that the President’s foreign policy rhetoric in the speech was “not close to reality.” The speech showed the President lives in a dream world as he did not even mention Al-Qaeda or the threat of Islamic terrorism. He promised vetoes on Iranian sanctions and has upset one Democratic Senator Robert Menendez of New Jersey who said that the administration is using “talking points that come straight out of Iran.”

His wishful thinking was not limited to foreign policy as the President ignored the Republican majority on Capitol Hill to call for more spending on a host of domestic programs, from free community college tuition to new infrastructure to preschool care and tax breaks for Americans in the lower income brackets. His idea to pay for all of these giveaways, of course, was higher taxes on the wealthy, such as higher capital gains and death taxes. These tax plans do not have a prayer of passage in the GOP controlled Congress, but the President does not care. He only wants the talking points and to demonize his political opponents.

Unlike Clinton and Democratic Presidents of the past, Barack Obama has no interest in working with the Republican Party. He will use the bully pulpit of his office to raise issues and use his presidential power to enact questionable executive orders, all without the involvement or approval of Congress.

Last night’s speech was a snoozer because it was more of what Americans how come to expect from President Obama. He boasted about his imaginary accomplishments, while he taunted the Republicans. It was a smooth delivery from a skilled orator, but it lacked what is truly needed in a President, leadership. Sadly, Barack Obama is leader of the liberals, but not a leader of the country.

It is not surprising that the first thing he did after giving the speech was to email his Democratic supporters asking them for money.

More in this category: « Jindal to fly No-Go Zone, State of Union in friendlier skies, before Cavuto Fox News, Cavuto has a Bobby Jindal "No-Go" Zone Problem »
back to top