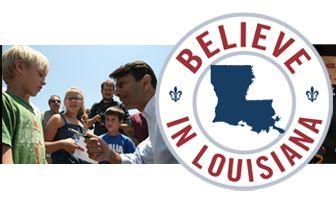 Any effectiveness in bringing stories to our readers can be attributed not to any dogged pursuit of truth by LouisianaVoice (We are, after all, old and basically lazy), but to our readers who continue to feed valuable tips and documents to us.

One such example followed our publication of the Thursday story about the creation of the super PAC Believe Again on behalf of Gov. Bobby Jindal in an attempt to raise campaign cash for his efforts to secure the Republican nomination for president by former U.S. Rep. Bob Livingston, Chairman, and Treasurer Rolfe McCollister. McCollister is Baton Rouge’s defender of freedom of the press (Irony, folks: remember McCollister, the CEO of Louisiana Business, publisher of the Baton Rouge Business Report, was part of the LSU Board of Supervisors that fought efforts to gain access to the list of candidates for LSU president).

One of our sharp-eyed readers noticed that we also ran a copy of a Jindal tweet about another of his organizations, www.standuptowashington.com and took it upon himself to try and see who owned the web domain (“not that we don’t already know,” he added).

The domain name itself, he said, was purchased through a company called Domains by Proxy,” a service that allows purchasers to obtain domains anonymously. “All information is hidden, so I pinged the domain and got the address: 50.56.48.143,” our reader said.

Now, of course, we have no clue what those numbers mean, but apparently he did.

“After that, I ran a search to see what other sites might be neighboring that one on the web server, and it turns out there are 62 domain names sharing that IP (internet provider) address.”

Our reader provided a list of the 62 domain names and we attempted to call each of the addresses and found that many were just purchased and held but no actual web page ever created (a common practice for those attempting to secure all similar-sounding names either in hopes of selling them or to protect a like-sounding web page they intend to use).

Besides the blank pages, we found a few that appeared to be legitimate and addressing such topics as health care, tax reform and one belonging to Warner Cable.

But we also found one belonging to OnMessage, the Virginia political consulting firm that has received more than $5 million in consulting fees from Jindal since 2007 and for which Jindal’s former campaign manager and chief of staff now works.

Also on the list was www.americanext.org, which is one of several non-profits created by Jindal to suck up donor contributions.

Several web page addresses were registered in the name of Florida Gov. Rick Scott for whom three of Jindal’s former campaign workers and former appointees now work. Known as the “Louisiana Mafia” in Florida, Melissa Sellers and husband and wife Frank and Meghan Collins figured in the rift over the Florida state police commissioner’s refusal to provide transportation in state vehicles for Scott campaign workers.

Only three of the 10 domain addresses owned by Scott were functional. Two were English and Spanish versions of the same page thanking Florida voters for returning Scott to office last fall. The other was simply www.letsgettowork.net.

Another was one belonging to unsuccessful U.S. Senate candidate Shane Osborne in which he thanked Nebraska voters who supported his failed candidacy.

One web address quickly became the subject of speculation. The web address www.believeinlouisiana.com is a “527” non-profit political organization launched by Jindal on Jan. 18, 2008, only days after he was inaugurated for his first term.

LouisianaVoice has published an extensive list of contributors to Believe in Louisiana who combined to pour more than $2.4 million into the organization, which reported spending $2.2 million, much of that to Teepell and OnMessage. http://www.campaignmoney.com/political/527/fresh-start-louisiana.asp

McCollister and David Roberts of Prairieville were listed by Louisiana Secretary corporate records as directors and its agent was David Woolridge, Jr., of the Baton Rouge law firm Roedel, Parsons, Koch, Blache, Balhoff & McCollister. Records reflect that the last annual report filed was in 2014 and that the organization is no longer in good standing.

Its web page pretty much reflected the same thing. Unlike times past when it was easily accessible, when we clicked on the web address this time, we got only a blank page.

Its fund balance, if it actually had one (the contributions and expenditures we cited were a couple of years old), were probably shifted into either www.standuptowashington.com or Jindal’s newest fund-raising ploy, www.believeagain.com.

One thing is abundantly evident (or should we say “absolutely”?) is the same tired old names keep bobbing to the surface every time Jindal floats a new .com.

But the presence of Livingston is a curious one. Jindal once worked for Livingston when the latter was in Congress. That was before Livingston was tabbed as the next House Speaker, only to resign in the wake of revelations he’d had an extra-marital affair even as the House was bringing impeachment charges against President Bill Clinton for his affair with Monica Lewinsky.

Livingston has moved on to form an influential lobbying office in Washington, so it’s somewhat perplexing as to why he would become involved in a campaign that had gotten “absolutely” no traction.

Meanwhile, back in Baton Rouge, the state’s financial condition continues to spiral out of control. Jindal is in town only to attend his prayer meeting at the Pete Maravich Assembly Center on the LSU campus tomorrow and then he’ll be off again, probably back to Iowa to court his tiny cadre of supporters.

As Jindal turns his attention more and more to the GOP president nomination, higher education is facing cuts of up to $370 million and on Thursday, we learned that the Department of Health and Hospitals may undergo mid-year cuts of $700 million.

It will be very interesting to see what positive spin Jindal will try to put on that turn of events. No doubt, he’ll attempt to take credit for reducing the size of government and cutting unnecessary expenses—all while chasing the Islamic hordes out of Europe.

Published on LouisianaVoice.com on January 23, 2014