The Case of the NFL and GOP leadership's deflated balls 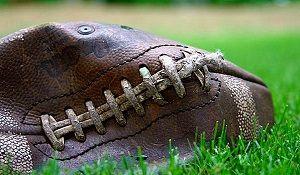 The sports media has been in a tizzy covering the scandal known as “deflate gate.” After it was discovered that 11 of the 12 footballs used by the New England Patriots in their playoff game against the Colts were deflated, the media speculation has been intense about whether the Patriots purposely altered the footballs in an attempt to gain an advantage. Their coach, Bill Belichick, and the team's quarterback, Tom Brady, have been peppered with questions. While they both have denied responsibility, the NFL and media investigation is continuing.

It is amazing that with all of the problems in the country, the media is fixated on such a trivial issue. In my view, a related topic is much more important, why do Republican Party leaders suffer from deflated balls, politically speaking? The party won a landslide mid-term victory in November, but they have been acting ever since like they lost the election to the Democrats.

Right after the election, Republican leaders in Congress passed the 1774 page “cromnibus” bill which cost $1.1 trillion and funded the President's executive amnesty for  5-million illegal aliens and the unpopular and unworkable Obamacare legislation. This was in direct opposition to the wishes of voters who gave Republicans control of both houses of Congress. The anger was so intense that conservatives swamped congressional offices with demands that John Boehner be replaced as Speaker of the House. Again, due to a lack of courage, only 25 House Republicans voted against Boehner. It seems GOP congressmen do not have the appetite for real change either within their party or throughout the nation.

While the President has been aggressively building his liberal legacy and acting like he won the November election, the real winners have been acting like losers and working on ways to capitulate or compromise with Obama.

After the Boehner revolt, the House did finally pass a bill to prevent the Department of Homeland Security from funding executive amnesty, but the bill is now headed to the Senate where it faces an “uncertain” future.   Senate leaders say they will “try” to pass the bill but no conservative should ever trust Senate Majority Leader Mitch McConnell. He claimed that he was going to stop the nomination of newly appointed Attorney General Loretta Lynch if she supported the President's executive amnesty. Obviously, Lynch will support Obama's amnesty policy, but her nomination is moving forward in the Senate Judiciary Committee. If she is confirmed by the Senate, it will be another win for the President and another loss for conservatives.

In the official response to the President's State of the Union address, U.S. Senator Joni Ernst (R-IA) did not even mention executive amnesty, even though the vast majority of the American people disapprove of the President's actions.

This lack of resolve on the illegal immigration issue was evident in a border security bill that House leadership was advocating this week. Fortunately, a revolt by conservatives postponed a vote on the inadequate measure. The initial bill did not contain enough border security measures to please the newly formed House Freedom Caucus, composed of nine courageous conservatives.

According to U.S. Senator Jeff Sessions (R-AL), the bill is flawed for a variety of reasons including the fact that it “...does not include worksite enforcement; it does not close dangerous asylum and national security loopholes; it does not cut-off access to federal welfare; and it does not require completion of the border fence.” Congrats to the brave band of conservatives for stopping this ineffectual legislation from being passed. Nevertheless, the entire episode shows how the House GOP leadership is more comfortable tinkering with a problem than really solving it. They want to pursue half measures instead of effective, strong action.

While Americans overwhelmingly support enhanced border security with more border patrol agents and additional fencing, GOP leaders lack the “cojones” to pass a tough bill. They are afraid of criticism from the media, Hispanic groups and of course Democratic colleagues. They are desperately afraid of being called racists, so, as a result, they are unwilling to pass meaningful legislation.

In the meantime, the 2016 presidential race is starting and conservative Republicans are desperately looking for a nominee who is courageous and will not be intimidated by the media or special interest groups. They want a nominee who is unafraid of criticism, sure in his or her convictions and ready to act to move this country in the right direction. Such leaders are in short supply and they stand in stunning contrast to what has been displayed by the GOP's dynamic duo of deflation: John Boehner and Mitch McConnell.