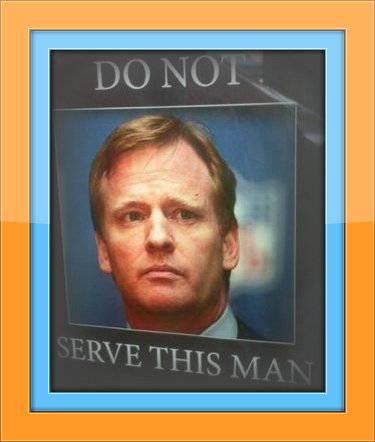 He and his Washington Redskins won the opening game of season 2012, the year the New Orleans Saints have been hoping to return to the Super Bowl glory but this time would be playing at home in the Super Dome.

Instead, right now, Washington, which is 1-0 has a better record than New Orleans with fifteen games left in the regular season .

Silly, as in leading the Redskins to over 300 yards and forty (count them) points over a team that looked like it could not “kill the head” of bounties if their own butts  depended upon it.

Not only are the Saints fans screaming at Goodell for dismantling a world-class coaching staff, but they might be crying for the return of Gregg Williams, the so-called Bounty architect.  They obviously want the rapid return of Sean Payton who my sources tell me has opened up a dancing lounge in the Bahamas to wastin away again in Margaritaville, searching for his lost shaker of salt.

Williams has been replaced by defensive specialist Steve Spagnuolo who quickly reminded Saints fans why his St. Louis Rams had such a dismal season under his coaching reigns.  After all, a relatively-fair offensive team in the Redskins blasted holes through the Saints defense racking up four decades of points in easy fashion led by a man—albeit quite gifted, who had never played a single NFL regular season game.  Ever.

Actually, after today, the Saints fans could be wishing they were watching former coach Jim Hastlett who was on the sidelines for the Redskins as their defensive coach.  Hastlett might only possess a 42-38 record prior to the post-Katrina chaos (a season when even owner Tom Benson became a refuge). But for today,   his defense ran circles around Brees and company, showing that the one-hundred-million-man is a mere mortal and that perhaps the only real drama we might have this year already occurred—his contract dispute.

Some Saints fans are going beyond Goodell for what he has done to the Saints and are now blaming the rag-tag team of “scab” referees who are playing their own rookie seasons and first games in NFL prime time.  Perhaps the refs made some bad calls, but it was not them who dropped balls they should have caught, who couldn’t nab Griffin in the backfield, who couldn’t field a running game and who made bone-head errors—such as being the 12th man on the field during a punt.  That egghead goof ultimately allowed Washington to keep the ball which enabled them to stay ahead, for good.

Alas, there is some good news coming out of today’s game: The New Orleans Saints do not play the Redskins again during the regular season; Drew Brees survived a heavy assault with his shoulder and head in tack, ready to earn the rest of the twenty million dollars this year; The Saints still have a chance to call in the Bill “Big Tuna” Parcells as their permanent interim coach;  Last, there’s always next year.

Moreover, what the game actually showed is owner Tom Benson  really might want to keep its general manager  Mickey Loomis on the bench after his suspension time final bell rings later this year.  Or, Benson might want to give Loomis a bench seat on Benson’s New Orleans Hornets team so he can learn the x’s and o’s of basketball.    Think about it.  The New  Orleans Saints  drafted two first-round choices last year—Cam :"Who is Dat" Jordan and Mark Ingram Jr.,.  Man, Ingram is just a junior, not even a III.  That should have told Loomis all he needed to know.  But, should he need further help, ask anybody who has ever seen a football game if they would rather have RG3 or MG2.  Enough said.

Something tells me that despite his setbacks this weekend with a three-panel decision allowing Jonathan Vilma and Will Smith to temporarily dodge their suspensions, there’s NFL commissioner Roger Goodell secretively grinning as he arranges his NFL kingdom pieces, allowing his Saints pawn to be killed on the first move.

Yep, something tells me that even if Vilma and Smith somehow play out the entire year of their suspensions, it will be Roger Goodell the Commish, who gets the Saints, for good.