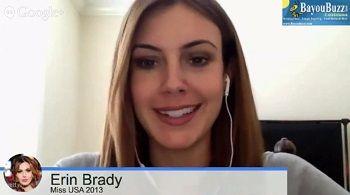 Genealogy Roadshow is only in his second year of production.  But if interest in family backgrounds and the growth of the genealogy industry is of any indication, the PBS show is on the road to being a great success.

The upcoming PBS segment focuses upon unique family histories from the New Orleans area.  One of the three genealogists and hosts of the program is Mary Tedesco,  who specializes in Italian lineage.  Today, Tedesco appeared in a Bayoubuzz Google hangout webcast interview with Miss USA 2013 Erin Brady, Google plus expert Ben Fisher and yours truly.

During segment one of the two-part series of the hangout interview, host Erin Brady asked Tedesco how she first started with genealogy.

Tedesco majored in math at Boston University.  Indeed, genealogy is not one of the usual math graduates chosen careers.

But, as life often has it, Tedesco’s intro this profession was by, well, an accident. After using the credentials of a co-worker, Tedesco browsed one of the online genealogy websites for some family information.  It was love at first sight and history was made and a star was born.  Mary Tedesco would soon become one of the world’s best known genealogists.

Choosing the right families and their own histories, however, is no accident.  The show host explained how the families’ mysteries are selected for the TV program.  During the hangout, she provided some back stage background into the process of choosing the families, researching the roots and producing the PBS show so embedded in science, history, technology, culture and curiosities.

Part one of New Orleans-based installment was  filmed in the historical Cabildo museum.  One of the stories told featured a New Orleans couple married after Hurricane Katrina who later discovered an incredible connection back at a tiny Italian village on a remote island.

And, when asked what one of her favorite genealogy mysteries was, Tedesco teased—referring to the upcoming “amazing” segment being shown nationally and on WYES-TV Channel 12 in New Orleans on February 3.

So, watch the video below of our Google Hangout interview excerpts.  The second video of excerpts will be published Thursday.

Of course, don’t forget to watch the second New Orleans medley of family histories on Tuesday.

More in this category: « The Case of the NFL and GOP leadership's deflated balls Vitter, sole Louisiana congressional voice supporting Dodd Frank protections »
back to top