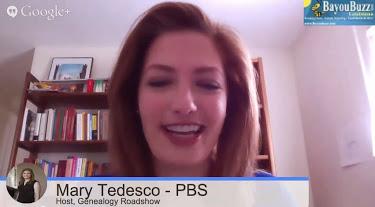 On Tuesday February 3, the second segment of the PBS Genealogy Roadshow filmed in New Orleans will be broadcasted nationally and locally on WYES-TV, Channel 12.

In part two of the interview the focus turned to New Orleans and the use of technologies to recreate histories.

In the interview segment video entitled, “Miss USA 2013 Erin Brady, PBS genealogist Mary Tedesco talk New Orleans families “, Miss USA 2013 and co-host, Erin Brady asked Tedesco, what was one of her biggest genealogy surprises?   The Roadshow host responded that the history of a New Orleans family member, generations ago, who had been reportedly mining for Gold in the Klondike but who had a secretive life elsewhere.  That segment was one of a number of family histories revealed in the first segment of the Road Show filmed at the famous Cabildo in New Orleans.

Tedesco also discussed how information is collected by local specialists after online tools are deployed.  That process was utilized in detailing the lives of the  New Orleans families.

Highlighting the importance of the upcoming New Orleans segment filmed at the Board of Trade, Tedesco emphasized that those interested in genealogy and histories and in New Orleans will absolutely not want to miss the upcoming show.   She also said it captures the real sense of the city.

One of the reasons genealogies has exploded as a vocation and hobby and why public interest in this field of personal histories is because of the remarkable combustion of technology and Internet advances.

In the Google Hangout interview,  with PBS’s Genealogy Roadshow’s host and genealogist Mary Tedesco,  the focus turned upon the marriage of the industry with the growth of past, present and future technologies—“Miss USA 2013 Erin Brady, PBS's Roadshow Mary Tedesco talk genealogy and tech”

The initial discussion dealing with the web of genealogists started with how Google Hangouts and how the video platform could be used in the industry to enable individuals to connect with others in various locations and disciplines.

Tedesco pointed out that crowdsourcing is being deployed to take information and ideas to various sectors to obtain assistance.  She said that a genealogist might have a need and request assistance from others.

Co-host Ben Fisher noted that there was a strong and popular Google Plus community, named Dear Myrtle’s, a number of the members watching the hangout live.

A Dear Myrtle  community member, Andrew Hatchett, commented online that less than two percent of records are online and asked Tedesco about the other methods that are utilized to obtain histories.

Bayoubuzz publisher Sabludowsky and Erin Brady raised the issues about the incredible futures linking genealogy  with technologies.  With so much information going online including medical records, the prospects of collecting and using the data in creating histories become so much more exciting and exhaustive.

Tedesco gave personal advice how those interested in the industry or in recording their own families tales and mysteries could get started.  She said, they should become a “record-keeper” made easy by the use of digital recordings.  She also outlined ways that interested students could get involved in making genealogy a career.