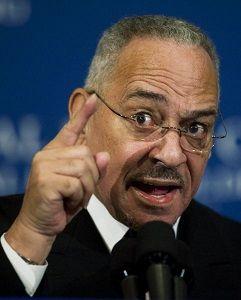 Just days after a group of evangelical Christians held an event on the LSU campus that attracted undue criticism, a state university has announced that they will feature a preacher of vile hatred on their campus. Yesterday, it was revealed that Southern University will have Rev. Jeremiah Wright address their students on February 19 at the Cotillion Ballroom.

Wright was the former spiritual adviser to President Obama, who was practically banished from public view after his embarrassing speeches were discovered.

During his 36 years as the Pastor of the Trinity United Church of Christ in Chicago, Illinois, Wright preached sermons filled with anti-white, anti-Jew and anti-American messages. He claimed that America's "chickens" were coming home to roost after the 9/11 attacks. In a 2003 sermon, he thundered that the government "wants us to sing 'God Bless America.' No, no, no, God damn America, that's in the Bible for killing innocent people."

For 20 years, Barack Obama sat in the pews of the Trinity United Church of Christ and supposedly never heard the Preacher say a nasty word about anyone. Of course, the opposite is true for Wright helped influence Obama to be the type of person he is today.

Wright inspired Obama's book "The Audacity of Hope," and, in fact, the President lifted its title from one of Wright's sermons. Wright married Barack and Michelle Obama and baptized their children, so he was more than just a "guy in the neighborhood," which is how Barack Obama described another close associate, former terrorist Bill Ayres.

In reality, Rev. Jeremiah Wright was a type of father to Barack Obama. Unfortunately, his influence was a negative one and it is one of the reasons Barack Obama has such a slanted view of his country.

Southern University will be exposing impressionable young adults to the same type of radical message on February 19. It could set these students on the path toward anti-Americanism and racial and religious hatred.

Incredibly, William Arp, the Southern dean who invited Wright, said that the minister had an "interesting and powerful message" to deliver. In contrast, Wright's message is a tired, anti-American rant that is neither interesting nor powerful.

Instead of inviting Wright, Southern University could have invited true heroes to their campus. If they wanted to invite an African American role model for their students, they could have invited people such as Herman Cain, Dr. Ben Carson, J.C. Watts, Senator Tim Scott (R-SC), former Congressman Allen West or Supreme Court Justice Clarence Thomas. All of these people could have conveyed a much more positive message than the one Rev. Wright will deliver.

Prior to this trip, taxpayers have a right to know whether any public funds will be used to pay Wright, or produce or publicize the event. If so, this would be an outrageous misuse of scarce taxpayer dollars.

Statewide media and government watchdogs should be much more concerned about Southern's invitation to Rev. Wright than Bobby Jindal's invitation to pastors who have never condemned this country or engaged in racial or religious bigotry. Sadly, the media and the watchdogs will be predictably silent as this minister unleashes his hatred on the young students of Southern University.
Tweet
Tweet
Published in Latest Buzz