The Whiter Shade of Jindal 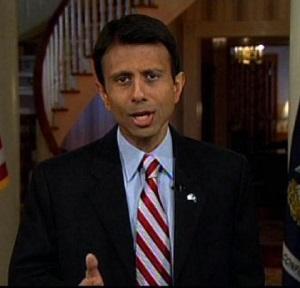 As of late, much has been written, by many, regarding the strange behavior and peculiar policy statements Louisiana Gov. Bobby Jindal has been generating.

We all know that he has desperately been trying to make noise and to attract attention in the presidential campaign arena by offering opinions to the national media on just about anything and everything while abdicating his official responsibilities to govern a state (last or close to dead last) on so many coveted lists.

He has claimed a religious war against the Islam, and appears to believe that those who do not think like him are declaring religious war upon his own views.

He made it a fool of himself while in London practicing on the stage of world politics.  He then carried the absurdity to the LSU campus for what he called a religious revival that everybody else knew was a rank-political stunt.

But perhaps the greatest lunacy of all came yesterday over the issue of the “whitening of Bobby Jindal”.

Liberal Blogger Lamar S. White Jr. made a stir over a portrait of Jindal that appears at the governor’s office. 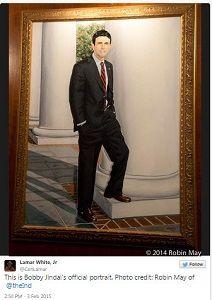 White seems to be contending that the official Jindal portrait was remarkably whiter than the official Louisiana governor, namely, Piyush Bobby Jindal.

Jindal, as we know, was named Piyush but adopted the name Bobby.  Later as a teen, he traded his Hindu religion for Catholicism.    He likes to call himself the transformational governor but in reality, it is his own identity which has been transformed the most.

As a result, it is only fair for any observer to wonder why he is going to such an extreme to not be whom he was born to be.

Which makes the entire whitening of the portrait story that much more comical.

As it turned out, Bobby Jindal’s chief of staff Kyle Plotkin responded via twitter that Lamar White was mistaken, that the white portrait cited by him was not the official Jindal painting.   Nope.  Plotkin made the point that the one Lamar White circulated out into tweetdom was painted by a Jindal fan.  It is not the official image. 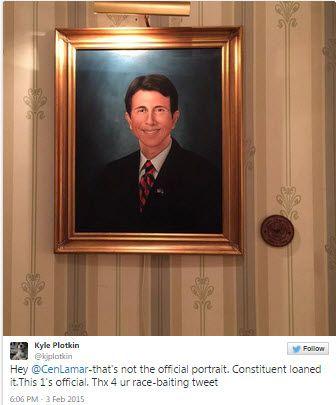 In a usual Jindal administration spin, Plotkin, while slapping the blogger’s wrist, for getting the official portrait wrong, also added the claim that Lamar White was engaging in “race baiting” politics.

Which accusation raises some interesting issues:

Just how could the Louisiana governor ( presidential hopeful, Indian-American, former Hindu, now Catholic, purveyor of religious wars and religious victimization, advocate of mandated assimilation, promoter of the proposition that only his Lord could save the United States, proponent that his God would defeat all others) possibly take umbrage over one’s pointing out a radically whitened caricature hanging on the state public wall, and turn the screw into race-baiting?

The fact remains whether the portrait is official or not, it is given official respect simply by hanging on the Louisiana’s peoples wall.  It is saying that the Governor wants visitors to see himself in that image.

But let’s get down to the real issue here: why is the Chief of Staff, a political advocate, a protector of the governor, so sensitive about a tweet concerning a whiter Jindal standing the capitol wall?  Why would Plotkin possibly take issue with someone wondering why the governor’s portrait is a lighter shade of pale, than that of reality?

Why would he step so far to the extreme to point out that the portrait is not the official one at all and then post the official portrait on twitter, one-- which turns out only to be gradients darker than the “unofficial” artwork?

It makes no sense other than calling it political race-baiting gotcha theater, especially since there exists another picture hanging on another state wall of the State wall.

Maybe not on the capitol fourth floor, a place that few go, but on the official "about" page of Louisiana Governor Bobby Jindal’s website, a wall the entire world sees when they visit the official state domain. 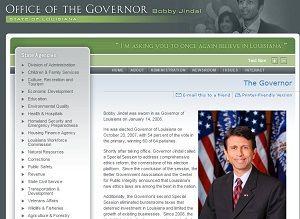 Whether Bobby Jindal is ashamed of being an Indian-American, or whether he feels that that ethnicity is to his political disadvantage, is an internal Jindal-mind matter.  Only he knows for sure.  However, what I do know is--a growing population is wondering if the bizarre behavior and policy practices are indications the presidential hopeful is not very comfortable in his own political skin.

Whether he intends it or not, the whitening of Jindal is part of a pattern and is now becoming a self-made narrative that only the governor himself could paint.

He and his staff can cry foul.  However, there is nothing race-baiting about when one is only pointing out the very obvious.