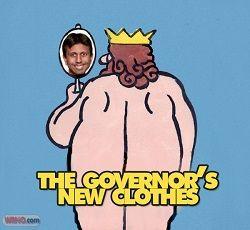 Louisiana Gov. Bobby Jindal has been quite busy this week.

"It was nice of the President to give us a history lesson at the Prayer breakfast.  Today, however, the issue right in front of his nose, in the here and now, is the terrorism of Radical Islam, the assassination of journalists, the beheading and burning alive of captives.

We will be happy to keep an eye out for runaway Christians, but it would be nice if he would face the reality of the situation today. The Medieval Christian threat is under control Mr. President. Please deal with the Radical Islamic threat today."

“Humanity has been grappling with these questions throughout human history,” Obama told the group. “And lest we get on our high horse and think this is unique to some other place, remember that during the Crusades and the Inquisition, people committed terrible deeds in the name of Christ. In our home country, slavery and Jim Crow all too often was justified in the name of Christ.”

Jindal has been active on the national scene attempting to distinguish himself from the other potential Republican candidates for US president on the issues.  On Monday, his most recent column appeared in Politico citing that America should not pursue the plans of other Republicans who are offering “Obamacare lite”.

On Thursday, it was off to Washington DC to speak to a conservative group about the ills of federal control of our education system, or otherwise known as Common Core.  The potential candidate leading so far is Jeb Bush who favors common core.

Later, Thursday night, Jindal again appeared on Fox News telling the nation that politicians should not be scaring the public about vaccinations. Chris Christie and Rand Paul earlier this week drew media attention when they endorsed the notion that parents have a right to choose whether or not to deny the inoculations for their kids.

Even when Gov. Jindal was not out there publishing columns, giving speeches or appearing on national TV, his name was in the media, in part, due to the activity of his Chief of Staff.  A Louisiana blogger posted a whitened image of a Jindal portrait. In response, the Chief of Staff Kyle Plotkin went on the attack claiming Jindal victimization and slammed the blogger for race-baiting.

However, what has become an increasingly Achilles heel for the Jindal presidential campaign is becoming a serious problem, if not in emergency, for the people who employ him.

The Louisiana budget is in chaos.  Questions are now being raised whether the governor has been giving away the store, draining the budget, so that Louisiana could bring in jobs and so that the governor could claim a better economy.

On Friday, Politico, published an article by New Orleans-based writer, Tyler Bridges, who has for the past two years outlining for the publication The Lens, the horrid budgetary conditions caused by Jindal’s policies.

In the article, Bridges cites Louisiana public leaders who outline the extent that Jindal has invaded hundreds of millions in various trust funds, in using one-time money, in deploying budgetary gimmicks to balance the Louisiana budget.  These budgetary schemes are  coming home to roost with devastations in higher education, healthcare midyear emergency cuts and a budget hole so deep that Louisiana might need to find $1.6 to $2 billion dollars to balance.  In effect, Hurricane Katrina did not cause as much disruption to the Louisiana budget as has Jindalonomics.

Today, Bob Mann, again, pointed out in the Times Picayune what some might call that Jindal’s  Medieval “supply-side” economics, has caused utter disaster.

Jindal's economic medicine was budgetary poison and, like the economic snake oil salesman he is, he continues peddling his worthless elixir. And like most charlatans, Jindal won't take his own medicine. If Jindal believed in supply-side economics, he would keep fighting for it. Instead, he made a half-hearted attempt and, after legislators rejected his plan, he never again pushed the idea.

Jindal won't propose cutting taxes because he knows it will not produce any new revenue. But he will continue preaching the gospel of tax cuts to Republican voters in Iowa and South Carolina because he believes it will produce him new votes.

In another article Thursday, Fox News WVUE and the Times Picayune revealed that Jindal has given away the store to help promote economic development.  While, there are supposedly billions of dollars of projects in the pipeline (in part due to high oil prices which spawned the massive growth), the Louisiana unemployment has increased while elsewhere the through the United States, the  numbers have been reduced.   The article entitled, Zurik: $11 billion later, Louisiana's incentives fail to deliver points out that Louisiana has been footing the bill for large corporations while the public suffers due to the lack of governmental services, inferior education and healthcare and higher taxes for others.

Here is just the opening segment of this article:

In 2011, the state approved a big incentive package for Cheniere Energy - over a 10-year period, a $1.5 billion package. The next year, 2012, Cheniere CEO Charif Souki received a large stock award, $49 million. His total income jumped from $6 million to $57 million. In 2013, he received an even larger payday, almost $142 million. In the two years following the incentives, Souki and five other executives took home $300 million in compensation.

Are state taxpayers footing the bill for these huge incomes?

“When a CEO gets a bump, a 900-percent pay bump, right after getting a billion-plus dollar subsidy award, that's a totally natural question,” LeRoy says.

No doubt, Governor  Jindal will continue to educate the national media and other potential voters with his opinions on anything that moves the national radar, but the Louisiana budget, higher education,  health care system is in such disarray that the nation will soon know what many in Louisiana has known for years:

That Louisiana Gov., Emperor Jindal, walks and talks loudly but, in reality, wears no clothes.

And, unfortunately, at least for the citizens of Louisiana, there is something quite evil about that.

More in this category: « Could Tom Benson family feud put Saints, Louisiana in the dark? Interesting Russian EuroChem-Louisiana transaction »
back to top