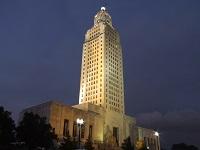 Citing reduction in oil prices, the Division of Administration released its plan today to Legislators to address the state’s $103.5 million mid-year deficit.

In a press statement, DOA said:

Today, the Division of Administration released its plan to Legislators to address the state’s $103.5 million mid-year deficit while protecting investments in higher education and critical services. The proposal includes reductions to state agency budgets through targeted contract reductions, savings in travel and operating services, strategic program reductions, and continued efficiencies.

“The decline in oil prices means putting everything on the table and making tough decisions about our spending in order to have a balanced budget,” said Commissioner of Administration Kristy Nichols. “We will continue to make reductions to ensure we are not spending more than we take in. This plan includes strategic reductions that not only balance the current year budget, but put us in a position to create continued savings next year.”

Last week, the Revenue Estimating Conference adopted an updated forecast that lowered revenue projections by $103.5 million for the current year and $203.8 million for fiscal year 2016. Since the start of the fiscal year, the price of a barrel of oil has declined by more than 50 percent, from $105 per barrel in July to $51 yesterday. That decline has reduced the state’s severance tax and royalty revenue in the current year by $275 million.

The proposal does not include reductions in higher education spending. It will be presented to the Joint Legislative Committee on the Budget February 20. While the Constitution allows 30 days for the administration to eliminate a deficit, this plan will be presented the same day the deficit is recognized to allow the administration to move quickly to resolve the shortfall.