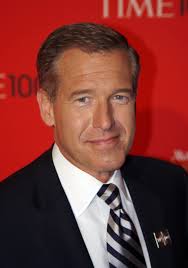 NBC News anchor Brian Williams is in the spotlight for all of the wrong reasons today. His outrageous lie about being in a helicopter brought down by a rocket propelled grenade in Iraq has been exposed. He told his false tale for over 12 years and it was only after an investigation by Stars and Stripes magazine that the truth was finally revealed. Williams gave a half-hearted apology on the newsWednesday night, but implied that he only recently started to weave a false tale. In fact, Williams has told the false narrative for years, including a 2013 appearance on the Late Night Show with David Letterman.

If Williams will lie about his exploits in Iraq, he will lie about anything. The latest focus of investigation is on his fantastic stories about Hurricane Katrina. His tales of seeing a dead body float by his French Quarter hotel room in New Orleans after the storm are being questioned by many people who were in city during the storm.

To make his story even more dramatic, Williams said he drank flood waters and contracted dysentery, however, the city’s former Health Director Brobson Lutz doubts the veracity of the anchor’s claim. According to Lutz, “I saw a lot of people with cuts and bruises and such, but I don’t recall a single, solitary case of gastroenteritis during Katrina or in the whole month afterward.”

Williams also stated that he was trapped inside a stairwell and rescued from roaming gangs by a rookie police officer that he remains friendly with even today. Of course, none of his statements can be verified, but due to his lies about his reporting during the Iraq War, nothing that he says can be believed without proof.

This is a crisis for NBC News, which already receives ample criticism for its management of the cable network MSNBC, which is suffering from historically low ratings. Williams just signed a multi-year contract paying his $10 million, so the network will be reluctant to completely sever ties with him. However, this scandal is doing tremendous harm to the network’s reputation and the longer this goes on without disciplinary action; the worse it will be for NBC.

In the meantime, the whole “lying Brian” story will only give viewers another reason to turn off television news and get their news from other sources such as the Internet and talk radio.