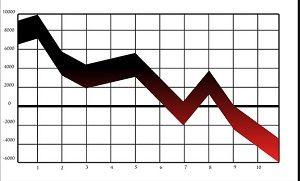 It is not pretty.
Call it piling on or Jindal bashing.
Whatever you say and however you want to say it, Louisiana Bobby Jindal is now, for the first time in his career, under great scrutiny nationally.

This time, it is not due to flubbing his maiden voyage on the political national stage, such as when he gave the GOP response to President Obama's speech.

No.  This time, his credibility is being challenged as well as his policies.

Which is the price to pay when you seek the prime-time national coverage but your record is sub-prime, at best.

The criticism and the scrutiny is not just coming from the local media who has gotten to know the Governor up close.
It is now the national media who seeing the Louisiana governor for what he is—a politician who will do whatever he needs to do and say whatever he needs to say, to become the President of the United States, no matter whom it might harm.
On the day after Governor Jindal crowed on MSNBC about how well the economy has been doing and how the credit ratings have gone through the positive-rating roof, the floor is collapsing around the governor and the state.  Louisiana is now asking for patience and time from Moody's and articles such as this one appearing in Yahoo News sums it up well.

Speaking of downgrading, the Louisiana Democratic Party, today, has pointed out, in a press release that things are not pretty for the boy-wonder governor.  Below that are local press reports on the seriousness of the Louisiana budget.

"This condition that we're facing is one of the most catastrophic in the history of higher education in the years that I lived here -- all of my life," said Leon Tarver, chairman of Southern's Board of Supervisors and former system president. "What it is going to require is a joint effort by all of higher education ... to devise strategies to try and influence the Legislature to be more open and, of course, more creative in addressing the fiscal needs of the state, in particular the fiscal needs of higher education."
Over the past seven years, Southern has seen its state funding cut by $46 million, or 47 percent. When Gov. Bobby Jindal took office, Southern's main campus in Baton Rouge received $55 million in state appropriations; that figure is now $23.1 million, a decline of 42 percent. Tuition for undergraduates has increased by more than 65 percent in recent years but those revenues have not kept pace with funding cuts.
"We are no longer a state-supported institution, we are a state-assisted institution," said Mason, who departs as the system's president June 30 after the board last year declined to renew his contract.
http://www.nola.com/news/baton-rouge/index.ssf/2015/02/proposed_budget_cuts_could_red.html?hootPostID=d28780f3420ad36d8140be77cdefe763

Treasurer John Kennedy says state officials, seeking to stave off a downgrade to Louisiana's credit rating, asked a national rating agency to give Louisiana time to clean up its budget mess.
Moody's Investors Service notified the state its rating committee will meet later this week to decide whether to drop Louisiana's credit rating.
Kennedy said he, Commissioner of Administration Kristy Nichols and the chairmen of the legislative budget committees held a conference call Wednesday with Moody's to urge against the downgrade.
http://m.apnews.com/ap/db_268748/contentdetail.htm?contentguid=wG8uh4MU

"When you run for president - when you position for president- it's a full time job," Editor and publisher of LaPolitics.com Jeremy Alford said.
"There's always been this sentiment, especially in Louisiana, that Bobby Jindal would have been better served as Governor spending more time on Avery Island than he has in Rhode Island."
Political analyst Jim Engster says many feel it's time for Jindal to return to Louisiana full-time and face the looming challenges.
"We've never had a presidential candidate who was a sitting governor who was openly courting the White House with problems at home like this. This is unprecedented," Engster said.
Jindal has made several trips back and forth to Washington and beyond in the last several weeks adding fodder to his critics who've challenged his travel schedule.
http://www.wafb.com/story/28076385/gov-bobby-jindal-in-national-spotlight-but-carrying-baggage-of-la-problems