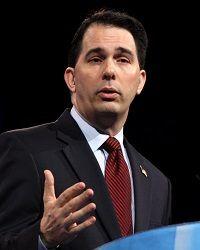 Clearly, the hottest Republican in the country today is Wisconsin Governor Scott Walker. After a well received speech to Congressman Steve King’s Freedom Summit, Walker has earned media attention and skyrocketed in the polls. Currently, he is in second place in New Hampshire and is leading in Iowa, while he is gaining ground on Florida Governor Jeb Bush nationally.

With the rise of Walker come the very predictable attacks from the liberal media. This week, the Washington Post decided to investigate Walker’s college years at Marquette University. The supposed scandal is that Walker did not graduate from college and left his senior year to take a job with the Red Cross. He eventually married and started winning elections and was not able to return to complete his courses and earn his degree. However, this is no scandal for it places Walker in line with the 69% of Americans who do not have a four year college degree. If elected, Walker would follow in the footsteps of Harry Truman, who also did not have a college degree, but was a successful President.

Clearly, it is much more important for a President to have Walker’s conservative values, strong work ethic, and common sense than advanced academic degrees. The nation has been suffering through six years of Barack Obama, who has an undergraduate degree from Columbia University and a law degree from Harvard University.

Obama is a well educated man, who has been a disaster as President. Unfortunately, Obama, has precious little private sector experience, but was a “community organizer” who was influenced by an array of radicals such as Rev. Jeremiah Wright and communist Frank Marshall Davis. In contrast, the role model for the supposedly under-educated Scott Walker was Ronald Reagan, one of the most influential Presidents in our nation’s history.

It is no surprise why liberals view Scott Walker with extreme trepidation. He has succeeded in a Democratic state and won three statewide elections in the last few years. He defeated the unions, survived a recall election and espouses strong conservative views. If selected as the GOP nominee, Walker would have a real chance of expanding the Republican coalition and attracting blue collar voters. These are voters known as “Reagan Democrats” who do not identify with traditional establishment GOP nominees like Mitt Romney. These voters can connect with Scott Walker who was not born to wealth, but became successful through hard work, perseverance as well as an adherence to traditional conservative values.

Because of his potential appeal, Walker should expect continuing attacks from the liberals in the Democratic Party and the media who will disparage his educational background. For example, on MSNBC, former Vermont Governor Howard Dean claimed “the issue is how well educated is this guy? And, that’s a problem.” Of course, it is only a problem for liberals trying to sabotage Walker’s presidential campaign.

To show how biased the media is on the issue, just look at their complete disinterest in the academic career of Barack Obama. Americans have never been able to view Obama’s college transcripts, so who knows whether did well or not.

In fact, his college years are full of mystery. Did he apply as a foreign student? Was he admitted due to affirmative action? Did he actually attend class? His former classmate at Columbia University, Wayne Allyn Root, claims that he never met Obama, even though they both studied political science. He also notes that he knows of no one at Columbia who ever attended classes with Obama or saw him on campus.

Obama could be the true Manchurian candidate, but the liberal media does not have time to investigate for they are too busy hounding Scott Walker.

More in this category: « Should Jindal blame oil price falls for Louisiana's $1.6B budget crises Treasurer Kennedy spanks Jindal for Moody’s negative outlook for Louisiana »
back to top