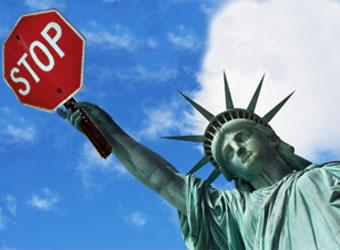 President Barack Obama has issued a controversial policy change today on illegal immigration that is beginning to send shockwaves across the nation’s political and ethnic polarities during an election year.

Instead of deporting young illegal immigrant children who have entered this country as children, his administration will begin to give a two-year deferral for people younger than 30 who came to the United States before the age of 16, are not a threat to society and who are productive as students or who served in the military.

Some believe the policy will hurt the President’s chances for re-election while others believe it will hurt Obama.

Republicans who have blocked Democratic efforts on immigration reform immediately condemned the move.

In a Twitter post, Republican Sen. Lindsey Graham of South Carolina said the decision "avoids dealing with Congress and the American people instead of fixing a broken immigration system once and for all."

"This is a classic Barack Obama move of choosing politics over leadership," Graham's tweet said.

"Many illegal immigrants will falsely claim they came here as children and the federal government has no way to check whether their claims are true," Smith said in a statement. "And once these illegal immigrants are granted deferred action, they can then apply for a work permit, which the administration routinely grants 90% of the time."

However, Democratic Sen. Dick Durbin of Illinois, who sponsored the DREAM Act, welcomed the announcement that he said "will give these young immigrants their chance to come out of the shadows and be part of the only country they've ever called home."

"These young people did not make the decision to come to this country, and it is not the American way to punish children for their parents' actions," Durbin said in a written statement.

What are your thoughts on the new immigration policy? Leave your comments below and be sure to take the poll above.