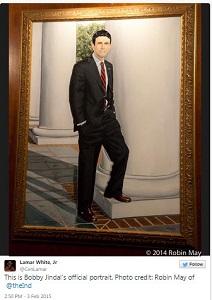 My Louisiana governor has me puzzled again in his quixotic quest to be a player on the national stage.  I thought Bobby Jindal was part of a Republican Party that tells government to get off our backs and mind its own business.  But he now is apparently on a national pursuit to make us all homogeneous in how we act, live and speak.  And when you come from Louisiana, he’s walking a slippery slope of being way too politically correct.

Jindal has been barnstorming the country with his message that we are all in one big melting pot. Here are Jindal’s words in a recent press release. “We came to America to be Americans. Not Indian-Americans, simply Americans. … If we wanted to be Indians, we would have stayed in India.”  Nothing wrong here.  It all comes downs to how Jindal defines “American.”  Remember that when our forefathers came to America, they did not assimilate or adopt the native Indian language.  Actually, there was a good bit of “ethnic cleansing” going on back in those early days.

Jindal governs a state that is about as culturally diverse as you can get.  Bayou country has a long history as a domestic mix of rednecks, Cajuns, Creoles, Latinos, African Americans, Italians, and Irishmen, just to name the larger ethnic groups.  They weren’t partying at all hours of the night this week down in New Orleans in the “American Quarter.”

Jindal appeared on Washington Watch radio program recently to assert that “we need to insist on English as our language.”  Now I know it’s the political rage throughout the country to demand that English should be the official language.  And quite frankly, I agree.  That is, from the public perspective.  I occasionally get a bit irritated when I’m told to “press one for English, two for Spanish” etc.  If a U.S. governmental body insists on printing forms, giving tests, and processing governmental applications only in English, then that is how the process works.  It’s the law.

But here’s where states’ rights come in.  If any state feels the need to offer services in another language, that should be its prerogative.  In some areas of my home state of Louisiana, French is the only language spoken by older Cajuns.  Grocery stores in some small south Louisiana communities put up daily specials in French, and the southern part of the state has a number of radio stations that carry French Cajun music.

Just this week, The New York Times profiled Mamou radio station KVPI that broadcasts to a large listening audience in French.  The popular morning show begins early and is called “La Tasse de Café.” Would the governor want to interfere with this morning ritual that so many of his constituents enjoy?

In the southeast corner of the state, a number of publications appear in Vietnamese to service the growing Asian community of immigrating fisherman. Louisiana election ballot information is printed not only in English, but also in Spanish and Vietnamese.

But what about “Speak English or Get Out?”  Look, I’ll stay out of your face and you stay out of mine.  Don’t tell me what language I can or cannot speak.  I don’t need some government official telling me what to do.  If I want to go around speaking any foreign language, that’s my right as an American.  I will not voluntarily stand by and let some politician or Big Brother set the parameters as to how I can or cannot communicate.  When you tell me what language to speak, then you start down the path of telling me where I can speak, what I can speak, or whether I can even speak at all.

So to all my friends, redneck like me or otherwise, pick and choose your fights wisely. The real problem is the overspending, money wasting, high taxing, and freedom-limiting bureaucrats in Washington and in our state capitols that lack the courage to set this country in the right direction with a little common sense.  You up there! Take care of the economic chaos you have created.  And for goodness sake, leave Boudreaux, Jinjing, Abdul, Jemarcus, Bubba, poor Pedro, and me alone.

“English?  Who needs that?  I’m never going to England!”

More in this category: « To Mr. Obama: The Godfather would turn ISIS into Pig Poo, and you? CBS Poll: Not great, not horrible for Bobby Jindal for 2016 run »
back to top