Jindal supported Obamacare before he opposed it? 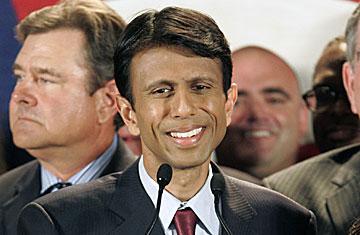 by Lamar White, Publisher of Cenlamar.com

In this series, I will compare Bobby Jindal’s pledges as a candidate in 2007 with his record in the Governor’s office. I began with the centerpiece of Jindal’s 2007 campaign, ethics reform, and today, I will be unpacking his 2007 campaign pledge for health care reform and compare it with his current stance against the Affordable Care Act.

“We must also maximize opportunities to attract federal investment in our (health care) system.” – Bobby Jindal, candidate for Louisiana Governor, 2007.

Bobby Jindal, at the age of 26, catapulted into top echelon of Louisiana government, becoming the youngest-ever Secretary of the Department of Health and Hospitals (DHH). He has always been considered a health care policy wonk, a wunderkind, and as the story goes, he earned his appointment to the DHH based largely on the strength of a white paper he wrote for a large consulting firm shortly after college. Following his stints in the capitol in Baton Rouge and then as President of the University of Louisiana system, Jindal worked on a bipartisan Presidential commission charged with making recommendations to reform Medicare. When he ran for governor in 2007,then Rep. Jindal published a policy paper outlining his vision for reform.

It’s not surprising: Health care was his wheelhouse. Eight years ago, he defined the problems: Today, Louisiana is still at the bottom of all of those bad lists. When he ran for governor in 2007, Bobby Jindal called on increased federal investments in Medicaid and Medicare; he touted Medicare Part D, prescription drug coverage, and Pharmacy Plus, as templates for how to implement programs that expand certain types of coverage for those who would be otherwise unqualified. He supported health insurance exchanges. Quoting (bold mine):

We should also allow individuals and small businesses to pool their health insurance purchasing power to get lower rates. Creation of a health insurance “exchange” would establish a “market organizer” that could serve as a central system for buying and selling insurance. Any resident of Louisiana would be eligible to purchase insurance through that exchange,whether as an individual or as an employee of a small business. This insurance would be a portable asset for the patient. The health care exchange would, in effect, facilitate a uniform withholding system allowing couples, for example, to combine contributions from two employers to buy coverage. The central exchange mechanism could alleviate administrative burdens for small businesses that offer group coverage by allowing employers to designate the exchange as a group insurance plan.

More in this category: « Revisited SUNO-UNO merger idea is good one Bobby Jindal, Rick Santorum, Tony Perkins to tour Israel on FRC trip »
back to top