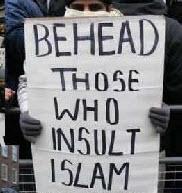 President Obama keeps lecturing us about “how to treat” ISIS, that nasty group of murderous terrorist thugs.

“Don’t grant terrorists legitimacy by labeling them ‘Islamic,’” scolds Obama from the headlines.

Why would anyone label ISIS terrorists “Islamic?”

ISIS lost that designation long ago, but most recently, ISIS reminded us that it is merely a criminal terrorist gang of thug and psychotics when it did two things– it killed an innocent woman whose only sin was being naive enough to be in that part of the world in the first place, and it kills other Muslims, conveniently but falsely labeling them “apostates.”

Killing the girl child, here, a young American woman whose sense of mercy and justice led her to help people in great need in a most dangerous place, was a horrific slap in the face of the Divine.

It doesn’t matter what anyone else has done.

Those who killed the girl will have to answer to a power infinitely higher than President Obama.

And that power may well have some questions for Obama as to why nothing, or nothing much was done by the most powerful nation on earth to rescue its own citizen, Kayla Mueller.  Most of us didn’t know that there even was a Kayla Mueller being held hostage by ISIS until ISIS announced her death, supposedly by putting her in a building that they were certain would be targeted for retaliatory bombing by Jordan for the Jordanian man they burned to death.

Killing the girl, according to the Qur’an, is just about the worst thing anyone can do.  But for people claiming to be Muslim, the act of killing the girl is an unspeakable thing.

It is one of the final acts that brings about the signs of the end of the world, the great “folding up,” the Al Takwir of the Holy Qur’an.

True Muslims know the signs of the “Folding Up”, and fear them:

“When the sun is wound up,

When the mountains are set moving,

When the stars scatter,

the pregnant camels are neglected,

When the wild beasts are unrestrained,

When the seas are set afire,

When the souls are sorted out,

When the girl buried alive will be asked

For what sin did ISIS kill Kayla Mueller?  For Kayla’s desire to help others in great distress?  For her courage in the face of terror?  For her enormous heart?  For being compassionate?

How could ISIS dare to murder Kayla Mueller, when “The Compassionate” is one of the many names of God in the Holy Qur’an?

God, the Compassionate, the Merciful– did not Kayla’s whole life embody these very divine qualities?

Mao once said, “Power comes out of the barrel of a gun.”

But he was corrected by Hannah Arendt, who more carefully observed that what really comes out of the barrel of that gun is the most perfect obedience because, if the victim wants to try to live, what other choice is there?

Kayla Mueller, and every person murdered by ISIS for any reason and all reasons, deserves better than the lecture to sit still and create job opportunities that President Obama is currently giving us.

The U.S. Department of State has said that it doesn’t want to kill anyone, and who disagrees with that?  Nobody does, except ISIS.  But meanwhile, no Muslim would deny that we will all be confronted with our deeds on Judgment Day.  It matters not whether we believe this.

Who will act for God to right the egregious wrongs ISIS has inflicted on the world?

“When the records [of deeds] are unfolded,

When the sky is stripped off,

When hell is set ablaze,

When paradise is brought near,

Then a soul shall know what it has readied [for itself].”

ISIS killed the girl when it made sure that Kayla Mueller would be buried alive in the rubble of a bombed building.  And President Obama, leader of the most powerful nation on earth, did nothing much to stop it, or to avenge it.

Make no mistake.  Hell is being set on fire.  Paradise is being brought near.

What to do?  Coffee drinking at a cozy White House “summit” won’t stop it.  Job creation will help redirect troubled Muslim youth, but it won’t stop the ISIS we are facing now.

We are being confronted with our deeds, both good and bad, in the Middle East, and all that flows from that.  There is much that Americans and Europeans should repent of, if we take a long view of things.

But meanwhile, someone needs to stop the end of the world.

Someone needs to stop ISIS.  Now.