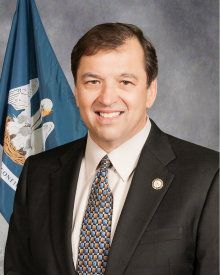 During the Puritan era, women convicted of adultery were forced to wear the Scarlet “A” on their dresses at all times to publicly shame them for their crime.  Today, Republicans who support any form of revenue increase are branded with the Scarlet “T” by their opponents and fervent ant-tax groups for their unpardonable sin of supporting TAXES.  Being stuck with the Scarlet T can be fatal to a Republican, particularly during a primary election when GOP candidates are trying to position themselves as furthest to the right with the party faithful.

As a Republican state legislator from Louisiana, I’ve certainly avoided the Scarlet T like the plague, even on measures that I didn’t have a particular problem with, such as extending four cents of the tobacco tax.  In fact, the closest I ever came to the Scarlet T was to support a driver’s license fee increase for highway litter abatement, with such a user fee being distinguished from a tax because it funds a specific service.  Even then I was attacked by a few as a heretic Republican, despite that fact that the fee increase was only $1 and payable once every four years.

Perhaps the most prominent anti-tax group is the Washington D.C. based Americans for Tax Reform, which challenges federal and state office holders to sign a pledge to “oppose any and all efforts to increase taxes.” Tax increases are interpreted very broadly to include any net revenue increase.  The group has its own distinctive Scarlet T for politicians who violate their tax vows, namely public humiliation in its “Hall of Shame.”

I don’t like taxes and ran on an anti-tax, starve the beast platform.  But after five years of constant cutting, including slashing 80% from higher education and limiting health care access for the most vulnerable, I’m simply tired of all the continuing carnage.

Unfortunately, state revenues continue to languish.  Perhaps recent tax incentives granted to certain industries were generous and created unintended loopholes.  I supported them all in the name of economic development, but now question the wisdom of giving away so much money with so little accountability.  Surely, closing loopholes and adjusting tax breaks to require an appropriate economic return to the state would not be classified as raising taxes.  But since these items raise revenue, they rate a Scarlet T under the strict Americans for Tax Reform criteria since they technically result in feeding the beast.

But does the Scarlet T always result in good policy choices?

In Louisiana, Republicans should be able to rein in generous tax incentives without having to worry about the Scarlet T.  On a federal level, Republicans should be able to attack America’s huge deficit with a package that includes modest revenue items in addition to large spending cuts. Why are Republican leaders unwilling to embrace a package that consists of 90% spending cuts and 10% revenue increases for the important goal of deficit reduction?  The Scarlet T!

The Americans for Tax Reform website states that the group was founded by Grover Norquist in 1985 at the request of President Reagan.  But didn’t President Reagan back several revenue increases during his term in office including the Tax Equity and Fiscal Responsibility Act to close loopholes from the Economic Recovery Tax Act?  Certainly, President Reagan is not listed in the ATR Hall of Shame.  The point is that there are appropriate times and appropriate ways to increase revenue.

Grover Norquist and Americans for Tax Reform have done an excellent job calling attention to and helping to limit tax increases. I heartily commend their important efforts in exposing tax increases masquerading as tax reform. But the group should recognize that there are also unwise and unfair corporate windfalls disguised as tax incentives and that reforming these is not necessarily raising taxes and deserving of the Scarlet T.

This week, the Jindal administration is scheduled to release its Executive Budget that will likely contain devastating cuts to higher education and health care, the two main areas of the budget that are not constitutionally protected.  Hopefully, we can find responsible ways to mitigate further damage to our important institutions without being deterred by the Scarlet T.