Obama fails Christians and Jews, but not Islamic Extremists 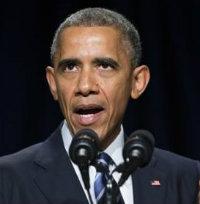 Whether Barack Obama is a Christian or not has been a raging debate for years. He claims he is a Christian, but continues to offer praise for Islam. Few people ever see him visiting a church today, but we do know that he spent two decades attending the church of the most radical pastor in American, Reverend Jeremiah Wright, who blamed America for the 9/11 attacks and regularly spewed anti-Semitic, anti-white and anti-American rhetoric. Needless to say, the President’s foundations as a Christian are troubling.

In speeches and interviews, he rarely quotes the Bible or discusses his Christian faith, so it is difficult to see into his heart. Thus, Americans have every right to wonder about his real religious convictions as well as his true feelings about this nation. In recent days, former New York Mayor Rudy Giuliani claimed that Obama does not love America. The Mayor has been blasted for his comments and most Republicans have not agreed with his assertion. Nonetheless, we do know that the President has frequently criticized or apologized for the nation, unlike Presidents of the past like Ronald Reagan, who always spoke glowingly about his country.

While often critical of his nation, the President is never critical of the Islamic faith. He is so concerned about being positive about Islam that he will never accurately identify the threat the nation faces from radical Islamic terrorism. Instead, he uses meaningless titles like “extremism.” In fact, his entire summit last week on “extremism” was a calculated diversion meant to focus attention away from the real problem. To make matters worse, he invited members of the Muslim Brotherhood, the terrorist group that has tremendous influence in the Obama White House, to the summit.

The summit was just a continuation of the President’s attempt to confuse the American people about the real threat facing the nation. At the recent National Prayer Breakfast, the President again refused to identify the threat from radical Islam and, instead, he compared the terrorism of today to the Crusades, which ended over 700 years ago.

The President will go to impossible lengths to avoid dealing with reality. If he wanted to truly defeat the threat from terrorist groups like the Islamic State it would be essential to first accurately identify the threat.

Obama is also unwilling to support countries that are taking effective action against radical Islam. The prime example is Egypt, which has seen a reduction in military aid from the United States after the overthrow of the corrupt Muslim Brother regime of Mohammed Morsi. Last week, the Islamic State beheaded 21 Coptic Christians in Libya, a stunning indication of how far the terrorist organization has extended its reach. Immediately, Egypt expressed outrage and launched air strikes against Islamic State positions in Libya. Amazingly, the Obama administration offered no support for the courageous actions of Egyptian President Abdel Fattah el-Sisi.

Possibly, the attack in Libya was a painful reminder for the Obama administration about how woeful its policy has been in that region. Libya has descended into hell during the Obama administration, which removed the dictator Muammar Gaddafi, but had no plan to deal with the dangerous aftermath. Today, Libya is a lawless state with terrorist groups running vast portions of the country, while the official government is limited to a small region in the east.

Another absolute Obama administration failure has been in Yemen. After the President praised the country as a success story, the American friendly regime has been toppled. As our State Department had to exit the country in a panic, Islamic terrorists took control of another government.

Among all of the administration’s disasters, the biggest one has been the inability to control the growth of the Islamic State, which is the most vicious threat our country faces today. During the Obama years, the Islamic State has expanded its operations throughout Iraq and Syria. The limited American air strikes have been ineffective in stopping the terror group’s forward march through those two countries.

Sadly, the carnage is continuing in brutal fashion as, just yesterday, 100 Christians were abducted by Islamic State fighters in Northeastern Syria. The terrorists focused on children, the elderly and women. They will probably be killed or subjected to the horror of slavery. People will be given the choice of converting, paying a fine or “death by the sword.” This area has been Christian since the 3rd Century A.D.; it is 4,000 years old and is considered a cradle of civilization. Now, it will be turned into an Islamic State hellhole.

Sadly, President Obama is doing nothing about this threat against Christians. He has consistently shown dishonesty about the worldwide radical Islamic threat to Christians and Jews, who are on the run in Europe with many seeking refuge in Israel.

Next month, Israeli Prime Minister Benjamin Netanyahu will address these issues and more when he speaks to a joint session of Congress. The President has such little regard for Israel that he will not even meet with the Prime Minister when he visits the nation’s capital. This is the same man who found time to meet with a YouTube comedian who engages in mindless antics like eating cereal in her bathtub.

No wonder foreign policy is in the forefront for the upcoming 2016 presidential race. America needs a serious President who will be truthful with the nation about the threat we face and be courageous enough to take effective action against Islamic terrorists. In the meantime, Americans should pray for our nation to survive the final two years of this reckless administration.