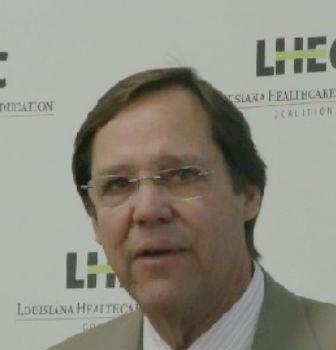 Mike Reitz, president and CEO of Blue Cross and Blue Shield of Louisiana, announced today he will retire from the post in mid-2016. When Reitz steps down in June of next year, he will have served the company for 40 years.

“As a collaborative and passionate leader, Mike Reitz leaves his distinctive mark on not just Blue Cross and Blue Shield of Louisiana, but on the evolving healthcare system in our state and on the citizens of Louisiana,” said Blue Cross Board Chairman Dan S. Borné. “And because he has always been a nurturing steward of this company, he will be leaving it in a position of extraordinary strength.”
Borné added that Reitz has experienced great success as a leader “because of his compassionate desire to deliver ‘unsurpassed value’ to our customers.”
Reitz explained last week at the company’s annual meeting that “unsurpassed value begins and ends with a consummate desire to treat customers as they deserve to be treated—with compassion and total respect.
“When we can lessen anxiety in times of sickness and need by being there for individuals and families in Louisiana, then we have begun to do our job,” Reitz said. “If we can help our customers maintain good health, then we will have contributed to their happiness and the wellbeing of their families.”
As the president of Louisiana’s largest health insurer, Reitz is well known for his passion for our home state. Under his leadership, the company introduced dozens of innovative programs and products to protect the health not only of Blue Cross customers, but of all Louisiana citizens. He personally authored the company’s mission statement, “To improve the health and lives of Louisianians,” and lived daily by those words.
During his administration, Reitz initiated an all-embracing, collaborative effort to reshape the state’s private healthcare system into one that is affordable, rewards quality care and is easy for all consumers to navigate. He enlisted the help of hospitals, physicians, employers and consumers to set into motion this much-needed transformation—one that is already seeing results.
“Blue Cross is partnering with providers on innovative healthcare programs that directly tie their payments to quality improvements that get better results for their patients. This shift from ‘fee-for-service’ to ‘fee-for-quality’ will impact costs, because when patients get healthier, costs go down,” Reitz said. “In addition to rewarding value-based care, we’re using claims data in exciting new ways; we’re building reports for providers so they can see how they compare to peers on cost and quality. And we’re partnering with them to develop innovative, high-performing networks that give customers unsurpassed quality at reduced premiums.”
The announcement of Reitz’s voluntary retirement sets off a calculated, orderly succession. Borné said the board will conduct a nationwide search for Reitz’s successor.
“For all things, there is a season, and my time is passing,” Reitz said. “I feel I have contributed to the success of the company over the past years by working with my colleagues to serve our customers—to provide the people who put their trust in us with the unsurpassed value they deserve. It gives me great satisfaction to have built this solid foundation. I look forward now, as I cross the finish line of my race, to passing the baton to a successor who will have an equal or greater passion for serving our customers first, and who will move our company to an even higher level.”
Some milestones that occurred during Reitz’s tenure as president and CEO include:
Successfully navigating the changes under the Affordable Care Act and offering products the first year in every metal level in every parish and every ZIP code of Louisiana on Healthcare.gov
Six consecutive “A” ratings from national rating service Standard and Poor’s (the company has 18 consecutive “A” ratings overall)
Three Brand Excellence Awards in four years (2008, 2009 and 2011) from the Blue Cross and Blue Shield Association, a national network of independent Blue Plans, for retaining the highest percentage of members year-to-year. In 2010, the company also received a Brand Excellence Award for Enrollment Growth
No. 1 ranking out of every Blues plan in the nation for five straight years for BlueCard® provider satisfaction in a survey conducted annually by the Blue Cross and Blue Shield Association. No other Blue Cross or Blue Shield plan has ever reached this milestone
The launch in 2013 of Quality Blue Primary Care (QBPC), a population health and quality improvement program, and in 2014, holding the first statewide QBPC Collaborative to showcase positive results in patient outcomes
The creation in 2012 of a first-of-its-kind challenge grant program, Challenge for a Healthier Louisiana, by the Blue Cross and Blue Shield of Louisiana Foundation—sparking a total investment of $27 million in targeted funding to improve the health of Louisiana communities
Establishment of a Digital Experience Department, which overhauled the company’s website to improve the customer experience, created an award-winning social media presence and earned a Best in Class designation in 2011 in both Insurance and Healthcare categories from the international organization Interactive Media Council
Designation by the Louisiana Department of Health and Hospitals as a Level 1 WellSpot for implementing voluntary changes to make healthier living easier for Louisiana citizens, in addition to receiving the 2013 Working Well in Louisiana award for large employers from the Louisiana Business Group on Health
Receiving the Hispanic Chamber of Commerce of Louisiana’s 2012 Excelencia Award as corporation of the year
Four major honors in five years from the Louisiana Minority Supplier Development Council, including 2013 Local Corporation of the Year
A 2012 Dr. Martin Luther King, Jr. Unsung Heroes Award from Louisiana State University for demonstrating a commitment to diversity, inclusion and outreach
A 2014 Excellence in Diversity Award from the Greater Baton Rouge Society of Human Resource Management for Blue Cross’ diversity and inclusion efforts centered on employees, suppliers and corporate initiatives

More in this category: « Bright lights upon Louisiana Film tax credits reforms Unfit to govern: the Black Caucus, Jindal and Obama connections »
back to top