Picture when Jindal and his administration are finished 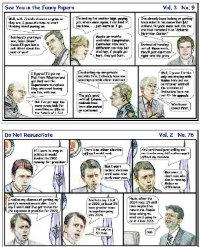 As the days of his administration dwindle and the certainty of the numbers sets in, Gov. Bobby finally must come to the undeniable realization that his quest for the Republican nomination is a vanishing dream (actually, it was over long ago), he and his disciples of delusion must now turn their attention to their respective futures.

Many political observers believe Gov. Bobby may be already jockeying for a cabinet post in lieu of his non-existent chances of becoming POTUS. Others think he might hook up with some conservative think tank to continue spewing his archaic talking points.

We coaxed our mystery cartoonist to come up with an appropriate strip for this post—and we even included a couple from the cartoon archives for good measure. (Bayoubuzz Note:  Please check out the cartoons on LouisianaVoice.com)

Then we asked a few of our readers to offer suggestions as to what Gov. Bobby and some of his top appointees might look forward to now that their meal ticket is about all used up.

We asked them to consider the following questions:

Some of the answers we got were funny and some serious. Some were anonymous for obvious reasons. All were interesting.

Stephen Winham, former State Budget Officer, said Gov. Bobby will abandon his quest for the White House only “when his handlers finally let him come out of the delusional fantasy world in which he obviously exists—or when he is offered and accepts whatever it is he really has his eye on.”

Winham, who earlier half-jokingly said Gov. Bobby “could have aspirations to replace Pat Robertson on the 700 Club. There’s a lot of money to be made on religion and the faithful will buy into what’s being told them rather than attempt to find the truth on their own.” He said many powerful figures, including Adolph Hitler, “have used the human proclivity for escaping from personal freedom and responsibility to their advantages. Some use it to promote evil, like Hitler. Others use it to promote good, like Billy Graham uses religion.” Gov. Bobby, he said, “will use it to promote Bobby.”

Earthmother said Gov. Bobby would not concede until 2045, “when he is 75,” but she added that even then he would “still think he can be a contendah, limping around the country with a cane and dragging a huge belt buckle (and) still spouting hatred and irrelevance.”

As to the prospects that Gov. Bobby would step down before his term expires, she pointed out that “he’s already resigned as governor, performing no duties or even remaining in the state but is too greedy and craven to do the honest thing and forego his salary and perks, like living free in the governor’s mansion. So much for the fool’s gold standard of ethics.”

Earthmother suggested an appropriate vocation for post-Gov. Bobby would be slopping pigs. But she was quick to apologize for insulting pigs and went on to say he has no job skills. “I cannot think of any way he could actually earn a living,” she said. “Perhaps some conservative gazillionaire will feel sorry for his family and give him a handout as a flight attendant on one of those private jets he is so fond of.”

C.B. Forgotston believes Gov. Bobby will start a think tank in the Washington, D.C. area “funded by the out-of-state contractors he hired for hundreds of millions of dollars to accomplish zero.”

He said Gov. Bobby will probably move his family to a state in the D.C. area and after his children finish high school he will get Louisiana legislators to give them scholarships to Tulane “because the tuition costs will be too high at all the public universities in Louisiana.”

John Sachs was less charitable. “He will remain governor because he knows his crazy ideas and policies have alienated so many that he must keep his state police entourage around him. And it’s free.”

Sachs said he does not believe Gov. Bobby will land a cabinet or even a department head position “because he can’t keep his mouth shut and no president is going to stand being upstaged by a subordinate. He will probably become a pitch man for a speed reading and speaking enterprise so that his followers can read the Bible and misinterpret it in a rapid-fire manner.”

He said Gov. Bobby “has no sense of loyalty. His relationships are all, without exception, based on what someone can do for him. All human life is expendable to Bobby.”

Jeanie Rhea said she believes Gov. Bobby could keep the flame of hope alive as he plots his next move from within a command center in his D.C. fortress home—because he’s too good to live down here on the plantation—“with Mike Edmonson providing private security and black Tahoes.” She said his best bet is as the leader of a mega-church/cult of some sort while continuing to remain “on-message” and keep his coffers filled with sermons and white papers about Christian bigotry, hatred, and disdain for the poor. “And yes, even as his popularity sinks, there are still enough nuts out there to keep him in business by dropping something into the plate (Rolfe still loves him).”

Gov. Bobby’s experience with exorcising demons while a student at Brown University “would also work well with his divine leadership role,” she said. “Folks love a good spit-spraying, demon rassler.”

One writer who wishes to remain anonymous said Gov. Bobby’s “very high level of narcissism,” will keep him in the race until mathematically eliminated and then perhaps he will jockey for the vice president consolation prize. But he doesn’t see that happening because he has too much baggage to help the party. He thinks if a Republican wins the presidency, Gov. Bobby may be offered a cabinet position to appease the tea partiers. “I would not be surprised to see him refuse a cabinet position because his bully pulpit would be limited by his boss,” he said.

Our unnamed reader said he does not expect Gov. Bobby to resign because quitting would “adversely impact his image.” He did, however suggest that he might concentrate his efforts toward becoming chairman of the National Republican Party, which he would perceive “as giving him a national base of power.

“To paraphrase the character Dr. Thackery in the current Cinemax series The Knick, ‘You can’t run away and join the circus unless the circus wants you.’”

Shifting to Gov. Bobby’s supporting cast, our anonymous contributor predicted there would be a “stream of departures starting shortly after the 2015 legislature adjourns up through (Gov. Bobby’s) final days. Some will join lobbying firms,” he said. “I could easily see Kristy Nichols and LABI in bed with each other. Her political career is essentially done in Louisiana.”

He said Timmy Teepell might follow Gov. Bobby wherever he goes. “It just depends upon the direction (Gov. Bobby) takes.”

Forgotston said Teepell will teach a course at Gov. Bobby’s think tank “on the Machiavellian approach to political campaigns. It will include lessons in how to launder campaign funds and how to avoid being found in campaign disclosure statements.”

Jimmy Faircloth, Forgotston said, will “return to law school to re-take the courses about winning lawsuits.” Moret, who is pulling down $350,000 per year while pursuing his Ph.D. from the Wharton School of Business at the University of Pennsylvania, “will become a pitch man for a new baldness cure,” and Kyle Plotkin “will remain Bobby’s manservant. He will be Bobby’s driver and carry his bags when Bobby attends important meetings to explain the ‘Louisiana Miracle.’”

Another reader, who also asked that we not use his name, said he believes Plotkin “should be a Wal-Mart greeter because he’s such a charming a**hole,” and that he sees Commissioner of Administration as “Cleopatra, Queen of Denial.”

Forgotston, however, said he believes Nichols “will start a beauty shop in the Capitol basement.”

Rhea, Winham and Earthmother chose to lump all of Gov. Bobby’s top appointees into one group with Rhea calling them “Jindalspawn,” and saying they “are well suited to be pseudo-ministers of propaganda, finance, legal affairs, education, etc., as they have consistently proven that they can suck the chrome off a trailer hitch.”

“Kristy Nichols will get a job promoting another politician via distortion of reality,” Winham said. “A lot of politicians look for people with that talent and, largely unchallenged, she has used it well in this administration.”

“I don’t know enough about Plotkin to speculate other than his possession of the same talent as Ms. Nichols. Stephen Moret, the smartest person working for (the administration), will be a success no matter what he does.

“Timmy Teepell will hang on to (Gov. Bobby) as long as he is able to use his home-schooled education to make a lot of money off him. When that dries up, he will find another right-wing religious figure to support him and his family.

“Jimmy Faircloth will continue to be among the ranks of high-profile, but incompetent attorneys who somehow make it in the world because of their perceived connections, real or imagined.”

Earthmother simply said they all should get jail time “for malfeasance, fiduciary irresponsibility and general crimes against humanity and especially the citizens of Louisiana.”