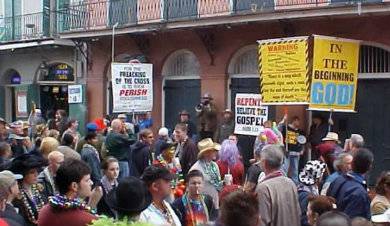 Anything goes on Bourbon Street

New Orleans is known throughout the world for many reasons, especially the wild atmosphere in the French Quarter. Tourists flock to New Orleans to enjoy the sights and sounds of Bourbon Street.

On weekends and especially during festivals like Carnival, Bourbon Street is the scene of drunken revelers, naked exhibitionism and plenty of other “illegal activity.” Usually police take a relaxed view of what happens on Bourbon Street and only intervene to stop serious criminal behavior such as theft or assault.

This anything goes attitude has worked well to make New Orleans one of the world’s top party destinations. Yet, this Lassiez-faire spirit will no longer be allowed during Labor Day weekend. This is when the city hosts the Southern Decadence Festival, which attracts gay revelers from throughout the country who descend on New Orleans to party, parade and network with friends.  For years, this festival has also attracted Christian preachers who use the opportunity to preach their message that homosexuality is a sin.

While preachers and revelers have peacefully co-existed during the gay festival weekend for several years, some French Quarter businesses and residents objected to street debates on issues such as the Bible and sexuality. There were complaints that preachers distributed literature and berated the tourists participating in the Southern Decadence Festival.

Several prominent French Quarter activists convinced the New Orleans City Council to pass an ordinance last year prohibiting this type of evangelization on Bourbon Street. The ordinance forbids "any person or group of persons to loiter or congregate on Bourbon Street for the purpose of disseminating any social, political or religious message" after sunset.

The ordinance is fatally flawed for many reasons. It allows preaching, just not at night. Pastors can preach to empty streets, just not when it is packed with people. According to Councilwoman Kristin Palmer it also allows such activity “five steps” off of the hallowed street of sin. Anything goes on Bourbon Street, but Heaven forbid, don’t preach during the Southern Decadence Festival.

City officials tolerate drunken debauchery, but not pastors, which seems both highly subjective and illegal. The city law tramples over the U.S. Constitution, which includes 1st Amendment guarantees of free speech. Bourbon Street should be big enough for sinners and saints, pastors and perverts.  Yet, this ordinance directly discriminates against just one group, pastors.

Of course, the pastors will challenge it in court and prevail. Nine people who were arrested September 1 are already planning to sue the City of New Orleans claiming that the anti-preaching ordinance is unconstitutional. Even Marjorie Esman of the American Civil Liberties Union registered her complaint with the council’s action, calling it a “very problematic law.”

In a city known as the Murder Capital of the nation, surely police can be engaged in more productive activity than arresting Christian ministers on Bourbon Street. New Orleans has much more serious problems than pastors with bull horns and flyers mixing with the Southern Decadence crowd. In fact, both groups should be able to co-exist in New Orleans a city that has just as many bars as churches.