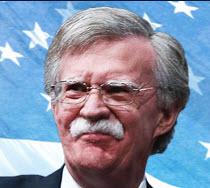 Louisiana US Senator David Vitter, who is a candidate for Louisiana governor, has picked up an endorsement and some campaign cash from Ambassador John Bolton.

Vitter, was among a group of candidates to whom The Bolton PAC  recently has endorsed and contributed.    The PAC also backed Governor, Rep. Ron DeSantis, the incumbent Congressman from Florida's 6th district, and Dr. Paul Chabot, candidate for Congress in California's 31st district. The Bolton PAC will donate $10,000 to DeSantis' campaign and Chabot will receive $5,000, while Sen. David Vitter's campaign will receive a contribution for $10,000.

According to the PAC, “these are the first endorsements in primary elections by Ambassador Bolton, and his first endorsements of 2015. Bolton is committed to supporting candidates for elected office who believe in protecting the United States' vital freedoms at home by securing American interests in a challenging world.

Bolton on Vitter: "As a member of the Senate Armed Services Committee, David has proven himself to be a trustworthy leader in supporting our military while improving America's intelligence systems. David understands the importance of supporting our allies and actively works with them to maintain a safe environment for American citizens. I look forward to seeing David lead the state of Louisiana."

Vitter has been leading the governor’s race and a recent poll showed him slightly ahead of the only Democratic candidate for Governor Jon Bel Edwards.  All polls, to date, have indicated that Vitter will be in a runoff, with the candidates needing to get over a majority in the first primary, to win outright, without a runoff.

The PAC also reports that “during the 2014 election cycle the Bolton PAC and SuperPAC collectively raised over $7.5 million, endorsed 87 Republican candidates across the country and contributed more than $470,000 to candidates who demonstrated commitment to strong national security policy. Additionally, the Bolton SuperPAC executed an extensive $5 million digital ad campaign that was implemented in 14 states, including robust efforts in New Hampshire, Iowa, Arkansas, and North Carolina.”

More in this category: « Kennedy urges Jindal admin not to burn Louisiana tobacco settlement The birther of Jindal's constitutional problem »
back to top