ISIS is abusing children, making them soldiers--why coddle these terrorists? 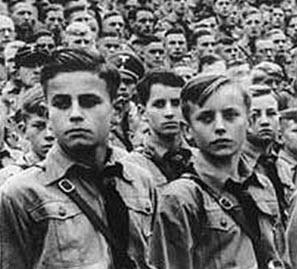 by Sarah Whalen
Does the world need another good reason to condemn ISIS, and wipe them out?

Is mass murder, mayhem and the slaughter of innocents not enough?

Is ISIS’s violent efforts to rob people of their homes and establish a totalitarian state insufficient cause to get the West going?

If so, then how about ISIS’s use of children, some younger than 10 years of age, as soldiers and murderers-in-training? Is that a good enough reason to get busy? http://www.theguardian.com/world/2015/mar/10/horror-of-isis-child-soldiers-state-of-terror.

But using children under 18 years of age to murder people whose sole sin is merely to be where ISIS is, is a reason that should strike at the very chord of anyone’s humanity. http://www.cnn.com/2015/03/11/middleeast/isis-children/.

And teaching little children, as ISIS does, how to decapitate a person by giving them dollies to practice on has an absolutely Satanic quality. http://www.dailymail.co.uk/news/article-2964224/ISIS-releases-chilling-video-showing-young-children-trained-battle-Syria.html.

ISIS is now teaching children to murder at age 5. http://www.news.com.au/world/asia/islamic-state-video-shows-child-soldiers-as-young-as-five/story-fnh81fz8-1227237870929.

Meanwhile, here in America, U.S. President Obama wonders whether ISIS is “Islamic,” “Islamist,” or “Muslim.” A committee of experts is lolling around in Washington, D.C., sorting out this weighty issue, busily worrying about finding all unemployed impoverished Muslims jobs and internships and career opportunities or whatever. http://www.whitehousedossier.com/2015/02/17/state-department-spokeswoman-fight-isis-jobs/.

But here, in backwoods Louisiana, where we walk around with shovels to decapitate the water moccasins and cottonmouth snakes that keep invading our terra firma when it rains too hard, is how I answer President Obama’s big ISIS question:

ISIS opens its ugly mouth, and Islamic-sounding noises come out.

Not anything more than anything true that ever came out the mouth of Pol Pot. Or Stalin. Or Hitler. Or any totalitarian glamorpuss you’d care to name. http://www.slideshare.net/fanuelej/totalitarianism-1281663; http://worldwithoutgenocide.org/genocides-and-conflicts/cambodian-genocide.

ISIS followers are just a pack of totalitarian slobs who capture and annihilate the helpless in very macabre and showy ways not often seen or discussed since the Roman Catholic Inquisition, in order to scare the wits out of the rest of us and, in particular, President Obama, so that he won’t ever let go of his Rooseveltian “New Deal” for the Middle East.

ISIS’s actions prove that they know nothing about how the Prophet Mohammed, Peace Be Upon Him, actually lived his life. Stories abound of how the Prophet gently and joyfully treated children during his lifetime. One true story, attested to by witnesses, goes that, one night, the Prophet was leading his people in prayers when his toddler son began crawling playfully on his back. The Prophet’s prayer then became unusually long. When people asked him whether something had happened, perhaps he was receiving another revelation from God, or had become ill, Mohammed smiled and replied:

“Nothing happened at all, but my son was riding on my back and I did not want to disturb him until he’d had enough.”

Are these the worlds of a man who would want a young child to shoot a man dead through the forehead? http://www.onislam.net/english/shariah/muhammad/a-mercy-for-all/442123-prophet-care-children-islam-kid-education.html.

Other stories about the Prophet (PBUH) softly and gently, even playfully, correcting young children abound. One story (called a “hadith”) tells of little Anas, who personally knew Mohammed, and recalled: “One day, he [the Prophet] sent me to do something.... So I went and came upon some boys who were playing in the street. All of a sudden Allah’s Messenger, who had come up behind, caught me by the neck, and when I looked at him, he was laughing. He said, “Go where I sent you, little Anas!” I replied, “Yes, I am going, Messenger of Allah!”

Where in this are tales of Mohammed putting guns and knives into the hands of children, and instructing them in savagery? http://www.islamicsites.com/prophet_way.asp.

Children, said Mohammed (PBUH) are to be loved, and that love is to be expressed openly to them by other adults. One hadith described how the Prophet kissed his son while a follower, Al-Aqra, was with him. When Al-Aqra observed how the Prophet showed love for his child, he said, ‘I have ten children and have never kissed one of them.” Mohammed was then said to have “cast a look” at Al-Aqra and replied: “Whoever is not merciful to others will not be treated mercifully.” http://sunnah.org/wordpress/2012/12/17/perfection-prophetic-mercy/.

Other accounts say that Prophet’s response was, “Surely a man like this will be a resident of the fire of hell.”

And still another hdith says the Prophet told a Bedouin, who objected to showing affection to young children, “What can I do if God has deprived your heart of all human feeling?”

People alive during the time of the Prophet, unlike anyone in ISIS, reported that, if the Prophet heard a child cry during prayer time, he would deliberately shorten the prayer so that the child could be comforted.

Nor did Mohammed short-change girls, as another hadith reveals, describing how he carried his great-granddaughter, Umamah, over his shoulder, even while praying, and put her down only to bow low during his prayer, and then, happily lifted her up again as he stood back up.

The Prophet even let little baby children pee on him! Yes! Without any revulsion or over-reaction. According to one of his wives, Aisha, he would just clean it up with some water.

If ISIS were truly Muslim, it would treat its children entirely differently. Instead, it shows itself to be a psychotic, totalitarian society of great evil that will likely last a long time, without our intervention.

There are hints that the Prophet knew the people he led were from a harsh culture that sometimes murdered children and treated surviving ones harshly. Indeed, the Qur’an frequently exhorts Muslims to be merciful and gentle to all children, not just their own. Children, in Islam, are the future: “[A]nd had you been harsh and hardhearted, surely they would have scattered from you,” says Surah Al-Imran, verse 155. “Surely,” says the Qur’an in Surah Al Isra, verse 31, “the killing of them [children] is a great sin.”

So valued are children in Islam that the Qur’an forbade aborting them, forbade infanticide (of which girl babies were almost always the victims), granted children the right to be nursed for at least two years, and set forth rules for their support and nourishment which, given the times and circumstances of the harsh desert climate in which these words were revealed, was nothing short of revolutionary.

For Muslims, the Qur’an’s directives transcend the force of law. But amazingly, it is the personal stories of little children about how they were treated, that endure. Another little girl, who knew the Prophet personally, recalled that she once visited him with her father, and “started playing (between the Prophet’s shoulders) and my father rebuked me harshly for that.” But the Prophet himself then admonished her father, “Leave her [alone],” and then, three times, the Prophet asked God to “let the daughter live a long life.”

Mohammed famously forbade the killing of women and children by his warriors. A famous hadith relates that, even after a captured mujahadin obtained a sharp razor and could have killed a young child in revenge, or to try to bargain for his own freedom, he did not do so, but instead, played with the child and treated it gently before returning it to its terrified mother. It is this story of basic compassion, told over and over as a way that true Muslims are to behave, even in the horrors of war, that has endured through the centuries.

These are the ways of true Muslims.

ISIS has no great tales of kindness, mercy, and fun with children to relate. Instead, it has only horror stories to tell.

There is an old Islamic saying: “If you feel no shame, then do as you wish.”

This, and nothing that is truly Islam, is how ISIS’s misguided followers are now living their lives.