The controlling hand of Carole and Kate Middleton's baby fingers 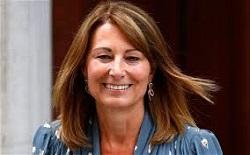 British newpapers are laughing that there are, once again, “three people in this marriage– William, Kate, and Carole.”  http://www.dailymail.co.uk/femail/article-2994223/Now-three-people-Kate-William-s-marriage-intruder-Carole-Middleton-s-taking-control-lives.html.

The royal word is that Carole’s a control freak.

Well, we know that’s true because she makes us add the royal “e” to her name.

How annoying is that?

The word in all the gosippy mags is that Carole and Michael Middleton, Kate’s pesky, interfering parents, refuse to leave Kate and William’s palatial Norfolk estate until after Kate’s baby is born and everyone is on a feeding schedule and settled in.  http://www.celebdirtylaundry.com/2015/kate-middletons-parents-moving-into-anmer-hall-before-baby-born-prince-charles-camilla-parker-bowles-furious/.

But some revisionism now says that Carole is refusing to leave Kensington Palace, where Kate has been staying recently, in order to show up at three or four outings that pass as her royal duties.    http://www.celebdirtylaundry.com/2015/kate-middleton-mother-carole-refuses-to-leave-kensington-palace-prince-william-sick-of-mother-in-law/.

And more significantly, Carole’s behavior is unnerving the Queen and Prince Charles, who is paying all the bills these days.

It’s hard to believe that a thirty-something, university-educated, worldly-wise vamp like Kate Middleton still needs more around-the-clock nursing care than a newborn infant herself, let alone the one that will likely be shown off to the cameras in a few weeks.

One theory being bandied about is that Carole and Michael seek to ennoble their family, and are pressuring Queen Elizabeth to make them, oh, the Earl and Countess of something or other–maybe of Oxford, since “Cambridge” is already taken.  Haha, just kidding!  There is already an Earl of Oxford.  And there’s a Lord Middleton from an ancient barony, and another Middleton line that is hanging on to its titles, thank you very much.  Could it be Bucklbebury?  Not in this century, apparently.  Or maybe some vacant title, like “Fairfax.”  http://www.telegraph.co.uk/news/uknews/kate-middleton/10204690/The-Middletons-deserve-a-title-step-forward-the-Earl-and-Countess-of-Fairfax.html.

Why ennoble the Middletons?

Why, because Carole and Michael, a former air stewardess and plane flight dispatcher, are going to be the grandparents of the future King George and other royal children, and it only makes sense that they will be given a title so that they can be properly included in royal activities!

At least, that is the Middleton logic, I’ve been told.  http://www.celebitchy.com/285213/will_pippa_middleton_get_an_aristocratic_title_after_her_sister_gives_birth/.

It will all be so very cozy!

But I dunno.... Why isn’t it enough for Carole and Michael to be Empress and Emperor of the Party Pieces Empire?  I mean, they claim that they dreamt it up all on their own, it is their own created world with a capitalization second only to another dwarfish empire, say, oh, Lichtenstein, and they have their own castle in Bucklebury, so...why are they horning in on the action of the British Royal Family?

Isn’t it royal enough that all the Middletons now have a nouveau coat of arms and all sport gold signet pinky rings?  http://fromberkshiretobuckingham.blogspot.com/2014/10/signet-rings-middletons-symbols-of.html.

Prince William, professional gossipers are now saying, felt so suffocated by Carole’s incessant mothering that he fled Anmer last month and begged the Queen to send him somewhere far, far away.  So, William went to Japan, an Asiatic walkabout hastily arranged to give him a break from the Middletons’ ministrations.  Indeed, his wide and relaxed smiles while on tour indicates that, away from Kate and her irrepressible mother, William is getting a rare chance to relax, and just be his genuinely royal self.    http://www.dailymail.co.uk/news/article-2973262/William-transformed-ancient-Japanese-warlord-Tokyo-visit.html.

How far in the world can William go to get away from the meddling Middletons?

But maybe there’s an additional truth that is something a little more sinister....

Remember how I mentioned that those crazed Birth Truthers have taken control of my computer’s hard drive, and keep hammering home their claim that Kate was never pregnant with Prince George and isn’t pregnant now with whatever will be produced as her next child?

The Birth Truthers claim that Kate is again using a surrogate.  It isn’t known whether the offspring being produced are from Kate’s eggs or William’s sperm, or hopefully both, or whether there are secret-surrogate somethings or everythings being gobbed together in some top-secret basement laboratory.  Birth Truthers aver that nurses who accidentally learn that Kate’s not the one pregnant are then found hanging dead, with suicide notes complaining about their mortgages, and, and....well, honestly, it sounds more like the mysterious death of Hillary Clinton’s Arkansas law partner, Vince Foster, or some diabolical Illuminati scheme when you put it all together!

But the Birth Truthers are adamant.

And all that crotch pressing Kate Middleton does in public?

Birth Truthers claim Kate does this because she is afraid that the fake pregnancy bump she wears in public will sag, or move unnaturally as she shifts around, and someone will notice, so she is always using her own fingers or her teensy clutch bag to prop it up.

I could almost believe it, but for the fact that Kate is always touching down south in public even when she’s not officially pregnant, and even when she’s sitting down and nothing fake would be falling about.  http://www.celebitchy.com/152206/kate_middleton_in_pre-wedding_black_issa_lovely_or_bony/.

So, I don’t know about these Birth Truthers and their claims.

Plus, the area where Kate Middleton usually plays in public is way lower down than her fake pregnancy bump.

I mean, “her pregnancy bump.”

Did I write, “fake pregnancy bump?” I don’t THINK so!

Just more proof of those diabolical Birth Truthers’s control of my hard drive!

Fie on them!  Or whatever.

Anyway, the Birth Truthers insist that Carole has moved into Anmer Hall in order to orchestrate the next fake “birth” of the baby that will be magically produced as another heir of William and Kate.  Birth Truthers believe that the real surrogate is somewhere secret, or could even be in Anmer’s attic, or chained to the basement, or in the stables, or somewhere.  Anyway, Birth Truthers theorize (if you can call it that), that Carole will announce that Kate suddenly went into labor at home, and everything happened too fast to get her to hospital, but the beautiful baby was born, thank God that Carole was there to be the midwife and bring it safely into the world, and then that will be that, Michael will be knighted, Carole will be damed (or whatever they call it) for their services to the Crown in cutting Anmer’s grass and doing the dishes and helping produce another heir for England.

Alternatively, Birth Truthers posit that, perhaps Carole and Michael are reading my “Bayou Buzz” article now, and so will alter their plans, and Kate “in labor” will be whisked away to a very small hospital or one-room clinic in the countryside so that it will be easier to conceal the fact that Kate didn’t actually give birth, but the surrogate did, and all will be kept darkly secret.

The Birth Truthers also posit that the Royal Family deliberately sent William away to Japan in order to build in some plausible deniability in Carole’s cockamamie dynastic schemes with these surrogate pregnancies and surrogate babies.  Traveling makes William  look less “in the loop.”

But their story has a ring of truth to it, doesn’t it?

Kate’ doesn’t look pregnant.  And she says that she doesn’t even FEEL pregnant.  Sometimes, she says, she forgets to “remember” that she is pregnant!

It’s easy to “forget” that you’re pregnant if you really are not pregnant.

Too much Carole, too much control.

That much is believable.

More in this category: « ISIS is abusing children, making them soldiers--why coddle these terrorists? History of the future of movies and films »
back to top