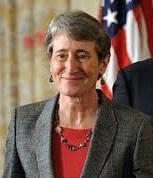 On Wednesday, Secretary of the Interior Sally Jewell will attend and open bids at an oil and gas lease sale offering 41.2 million acres for exploration and development in the Central Planning Area offshore Louisiana, Mississippi and Alabama.

The event will be held in New Orleans.

BOEM estimates the sale could result in the production of 460 to 890 million barrels of oil, and 1.9 trillion cubic feet to 3.9 trillion cubic feet of natural gas. When bidding closed today, 35 companies had submitted 195 bids on 169 blocks offered in the sale. A map of the location of tracts receiving bids will be available tomorrow at 7:00 a.m. CDT on the BOEM website at: www.boem.gov/Sale-235/.

BOEM oversees 160 million acres on the Outer Continental Shelf off Texas, Louisiana, Mississippi, Alabama and Florida. About 28.5 million acres (5,279 blocks) are leased for oil and gas development; and 4.6 million of those acres (924 blocks) are producing oil and natural gas.

“We applaud Senators Thune and Manchin and Congressmen Olson and Latta for reintroducing the CASE Act. Their bill will help ensure that manufacturers eager to invest in the U.S. have a clear regulatory process and cost-effective, feasible standards. It’s a common-sense approach that lets local economies grow even as air quality continues to improve.

“Emissions of common air pollutants and their precursors have fallen substantially, according to EPA. Between 1980 and 2013, total emissions of the six principal air pollutants fell 62 percent and ozone concentrations fell 33 percent, even as U.S. gross domestic product grew 145 percent. Voluntary and regulatory programs will continue to reduce ozone concentrations through 2030.

“The current ozone NAAQS of 75 parts per billion is the most stringent ever and hasn’t been fully implemented across the country. Parts of 26 states still don’t meet it. EPA should assist them before pursuing new regulations that could slow or stop manufacturing growth.”

Under the CASE Act, 85 percent of the counties unable to meet the current standard would have to do so before EPA lowers the level yet again. The Agency would be required to use direct air quality monitoring, resulting in a more accurate assessment of nonattainment areas. And EPA would have to consider cost and feasibility when setting lower ozone standards.