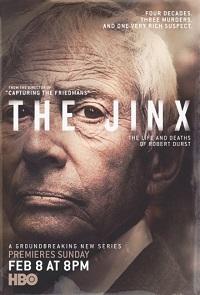 In a twist more bizarre than the best Hollywood plot, New York real estate tycoon Robert Durst was arrested on a murder warrant in New Orleans on Saturday night hours before the finale of the HBO documentary “The Jinx” aired throughout the nation.

The six part documentary delved into the crazy life of Durst, who is connected to three potential murders. His first wife, Kathy Durst, went missing 33 years ago and has never been found. Durst gave police a story and timeline of his wife’s activities on the fateful night she went missing. It was filled with inaccuracies and outright lies, but the police were unable to locate her body, so Durst was never charged in the case.

In 2000, the Westchester County New York District Attorney Jeanine Pirro decided to reopen the case. Her investigators were interested in interviewing Susan Berman, Durst’s former spokesperson, because of her knowledge of the case. They had planned to meet with her in Los Angeles, but, days before the scheduled interview, she was mysteriously murdered.

Soon thereafter, he showed up in Galveston, Texas and was charged with the killing and dismemberment of his neighbor, Morris Black. He admitted to killing Black and chopping up the body, but claimed it was done in self defense. Amazingly, a jury bought his ridiculous defense and he was acquitted. In Galveston, Durst was dressing up as a mute woman to avoid detection, but he eventually confided his true identity to Black. Texas prosecutors believe Black attempted to blackmail Durst and that cost him his life.

After the Galveston verdict, Durst has been charged with a variety of minor offenses in the last few years. He has been charged on offenses ranging from trespassing on his brother’s property to urinating on a bag of skittles in a store, but he has avoided major jail time in all of the cases.

Now, his luck is finally running out. After the documentary unveiled a letter that Durst sent to Berman with handwriting that matched a note sent to police alerting them about the location of her body, it seemed that all doubt was erased. To make matters even more conclusive, Durst was taped after finishing a second interview with filmmakers in the bathroom on a hot microphone saying that he “killed them all, of course.” Whether he knew the microphone was “hot,” or not is another issue because the mental condition of Durst is questionable.

In New Orleans he is being charged with possession of an unregistered firearm and a small amount of marijuana. In appearances before the Magistrate, Durst appeared to be disoriented, fall asleep and even mumble to himself.

He will eventually be going to Los Angeles to face murder charges for the death of Susan Berman. His high priced attorneys claim he is innocent and they say they will “fight” for him.

Hopefully, Durst will not be able to use his millions of dollars to evade justice once again. At least three people have died at his hands and the family members and friends of the victims deserve justice.

It would be the height of irony if Durst’s thirst for attention and notoriety eventually lead to his conviction. He asked the filmmakers to do the documentary because of his insatiable need for the limelight. It probably also drove his desire for murder. It could be his ultimate undoing.

More in this category: « Kennedy: Louisiana revenue, general fund growth down again Louisiana Democrats pop Jindal over possibilities of no state Presidential primary »
back to top