Kenner Mayor Mike Yenni will announce his future political intentions tonight with a television commercial and a gathering. 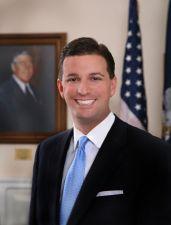 It has been reported that Yenni will be running for Jefferson Parish President to replace current parish president John Young, a candidate for Lt. Governor.

Kenner Mayor Mike Yenni will air a :30 commercial in all local 6PM and 10PM newscasts announcing his decision on seeking a higher office.
“I see it as a show of respect to all citizens of Kenner and Jefferson Parish to let everyone know simultaneously my decision regarding my future in public service,” said Yenni. The commercial, produced by Yenni media strategist Greg Buisson, includes Yenni with his wife Michele and their daughter Reagan.

Yenni will also address supporters tonight at 6:30PM at Chateau Golf & Country Club, 3600 Chateau Boulevard in Kenner, where he will detail his reasons for seeking a new office. Doors open at 6PM.

More in this category: « Louisiana Democrats pop Jindal over possibilities of no state Presidential primary Jindal, Louisiana Department of Education in Common Core PR battle »
back to top