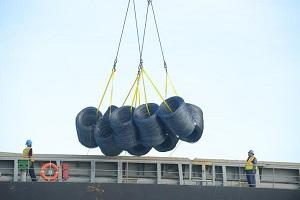 A banner year for the Port of New Orleans.

Cargo worked at the Port of New Orleans’ public docks in 2014 totaled 8.37 million tons, the highest total since 2000 and up 28 percent compared to the prior 12-month period.

“It was a busy year for the Port and these numbers reflect the success we’ve realized from the combined efforts of the entire port community,” said Gary LaGrange, Port President and CEO. “This is great news and creates momentum for our terminal operators and customers. The challenge now is to build upon these successes and continue to grow.”

New shippers such as Chiquita, which returned to the Port after a 40-year hiatus, and project cargo generated by the growing chemical industry, will bolster cargo figures in the future, LaGrange said.

The cargo figures come on the heels of record cruise growth, as the Port topped 1 million passenger embarkations and disembarkations for the first time and an all-time container mark of 490,526 twenty-foot-equivalent units in 2014 and a projection of well over 500,000 TEUs for 2015.

(From Port of New Orleans Press)

More in this category: « My dear friend, Barbara Bush, I will not help Jeb for President Louisiana governor's race polls, voters unrest and broke »
back to top