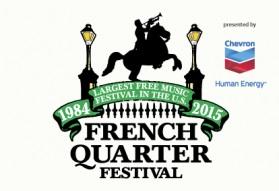 Spring is here and the French Quarter Festival is near.

Today, the festival announced final details for an attraction that now draws hundreds of thousands per year.

Two New Stages and Over a Dozen Debuts in 2015

Since 1984, French Quarter Festival has been committed to featuring New Orleans' finest artists every day of the festival, on stages all over the French Quarter. The tradition grows in 2015, when French Quarter Festivals, Inc. unveils two new stages and expands its footprint and musical lineup. The new Spanish Plaza stage sponsored by the Outlet Collection at Riverwalk and Harrah's New Orleans will take the music across Canal Street with three days of programming. Artists include: Andre Bouvier and the Royal Bohemians; Zion Trinity Band; Debauche; Egg Yolk Jubilee; Donna Angelle and the Zydeco Posse; The Upstarts; Sons of Soul; King James & The Special Men; Erica Falls; Hot 8 Brass Band; Johnny J. and the Hitmen; Judy Spellman & Company; Magnetic Ear; Russell Batiste and the Wild Tchoupitoulas; andBig Sam's Funky Nation.

The Chevron Cajun Zydeco Showcase launched in 2013 at the Bienville Triangle (North Peters near St. Louis Street) and has since become one of the Festival's most popular stages. In 2015, Grammy winning"King of Cajun" Jo-El Sonnier; Travis Matte and the Kingpins - a band that packs Louisiana dance halls with their infectious blend of zydeco, hip hop and rock; and Chris Ardoin make their festival debuts on the stage. Other artists include: Jimmy Thibodeaux, Waylon Thibodeaux Band, Bruce Daigrepont Cajun Band, Roddy Romero and the Hub City All Stars, Lost Bayou Ramblers, and Amanda Shaw.

Over 300 acts will perform at French Quarter Festival, providing over 400 hours of free music. On 23 stages with over 1,700 musicians, more than a dozen acts make their festival debut in 2015. The Speakeasy Quartet and NOLA Jitterbugs will turn Jackson Square into a swing-dance party during their high-energy "watch and learn" performance on Thursday, April 9th on the Capital One Bank Jackson Square Stage. Other debuts include Doug Kershaw (playing with Steve Riley), The Honorable South, Guitar Slim, Jr, The Write Brothers, Los Otras, New Orleans Swamp Donkeys, and many more.

In addition to Festival debuts, French Quarter Festival supports budding artists - and is where some of the region's most beloved and famous musicians such as Trombone Shorty, Hunter Hayes, Imagination Movers, and Kermit Ruffins first played to large audiences. Continuing the spirit of promoting new talent, the 2015 Festival welcomes several young artists and celebrates the musical dynasties that are so unique to New Orleans: The Doghill Stompers, grandsons of Boozoo Chavis, one of the founding fathers of Zydeco; Jenard Andrews' (son of trumpeter James Andrews and the cousin of Troy "Trombone Shorty" Andrews) New Breed Brass Band performs on the Popeyes Brass Band Jam with OffBeat Magazine at the Louisiana State Museum's Old U.S. Mint; and Neshia Ruffins, daughter of Kermit Ruffins, makes her festival debut withNeshia Ruffins & the Young Franchise Band, also at the Old U.S Mint.

In celebration of the opening of the Jazz Market on Oretha Castle Haley Boulevard, New Orleans Jazz Orchestra will take residency at the 2015 French Quarter Festival with unique performances and special guests each day.

The 2015 French Quarter Festival will feature over 1,700 local artists. Festival-organizers remain committed to growing the Musician Sponsorship Program; every dollar donated to the fund goes directly to the artists. In 2014, a total of over 250 individuals, foundations, and businesses signed up to support local musicians by 'adopting an artist'. Sponsors come from all over the United States - from California to Maryland - and are helping to keep French Quarter Festival free for the community. The Festival is still seeking 2015 sponsorships. Contact Georgia Rhody at (504) 522-5730 or email [email protected] for more information.

In a city famous for its wealth of delicious and unique traditional food, French Quarter Festival gives attendees a taste of the best of the best at the ''The World's Largest Jazz Brunch'. Over 60 vendors feature classic New Orleans dishes as well as cuisine from the finest restaurants in the region. A number of restaurants have been with the festival since its beginning in 1984, and have been great partners for 30 years: Desire Oyster Bar, Court of Two Sisters, Pat O'Brien's, Trey Yuen, Tujague's, and Vaucresson Sausage. Other festival favorites return for 2015, including Antoine's, Bennachin, Dickie Brennan's Steakhouse, Galatoire's, GW Fins, Haydel's Bakery, House of Blues, Jacques-Imo's, K-Paul's, Lasyone's Meat Pies, Love at First Bite, Mrs. Wheat's, Muriel's, Praline Connection, Restaurant R'evolution, Ruth's Chris Steak House, Three Muses, and more.

Let Them Talk, the annual lecture series curated by Fred Kasten and Dr. Connie Atkinson featuring Louisiana musicians, will return to Louisiana State Museum's Old U.S. Mint for the 2015 French Quarter Festival. This year's schedule includes: Meet Blues Hall of Fame Writer John Broven, a talk with the author ofRhythm and Blues in New Orleans and South to Louisiana: The Music of the Cajun Bayous, two books about Louisiana music that are widely hailed as among the best; The Magic of Cosimo Matassa a panel that includes Allen Toussaint, Deacon John, Gerri Hall, and John Broven; and Jo-El Sonnier and The Legacy, a talk with the Grammy award winning accordion prodigy and champion of Cajun culture. Let Them Talk is free and open to the public. This series is made possible with support from the UNO Midlo Center and the Louisiana State Museum. Visit fqfi.org/frenchquarter/fests/special_events/ for full Let Them Talk schedule.

Festival organizers are thrilled to announce the return of the Chevron Children's Headquarters. Relocated to the Natchez Wharf at the foot of Toulouse Street, the space will feature the Chevron STEAM Zone (Science, Technology, Engineering, Arts, and Math), as well as a Children's Performance Tent with a dozen acts sponsored by Tulane Pediatrics and the New Orleans Jazz National Historic Park. "We take a comprehensive approach to investments in education by including the arts in our programs and partnerships and getting students excited about STEAM," said Chevron Gulf of Mexico Vice President Mike Illanne. "We understand that increasing student interest in science, technology, engineering, art and math leads to better test scores and greater professional success. It is for these reasons that Chevron and our partner organizations are bringing the Chevron STEAM Zone to French Quarter Festival 2015."

Chevron supports many organizations in the community, and this year they are bringing several partners together to create even more interactive and fun experiences for French Quarter Festival's youngest attendees. In addition to an oyster reef display, The Nature Conservancy will host fiddler crab races where children interact with the crabs in their "natural" habitat with fun prizes for winners. The Edible Schoolyard New Orleans and FirstLine Schools will teach healthy cooking and eating tips. New Orleans Jazz Orchestra will curate an "instrument petting zoo" where professional teachers will equip budding musicians with their own mouthpiece (which kids can keep), allowing them to play instruments and participate in breathing lessons. Project Lead the Way will showcase Vex robotics and participants will be able to compete in various challenges. Activities include learning design, manipulations, and programming. The George Rodrigue Foundation of the Arts and Louisiana A+ Schools return to the children's area with their always popular hands-on activities like GAK - homemade modeling clay that teaches kids about polymers while they craft - and painting for children. Staff and volunteers will facilitate multiple avenues for artistic outlets. Also returning is Audubon Nature Institute with a video game designed to teach children how to make better choices to support a healthy planet; Tulane Pediatrics will participate with an array of activities to promote healthy lifestyles, face painting, and contests with prizes, and The New Orleans Jazz National Historic Park, once again will invite kids to become 'Junior Rangers' by teaching them survival tips as well as how to help protect and preserve the parks of New Orleans.

A second children's area in the heart of the French Quarter is hosted by the Hermann-Grima House. The children's activities take place in the property's lush and beautiful courtyard - the only with an original horse stable and functional 1830s outdoor kitchen in the neighborhood. Participants will enjoy music, entertainment, crafts, and educational projects for children of all ages. Community partners include thePreservation Resource Center of New Orleans, Young Audiences Louisiana, The Green Project, Beauregard-Keyes House, New Orleans Public Library, RicRACK, Inc., and the Louisiana State Museum.

Opening Night Gala returns to Antoine's
Thursday April 9th, the French Quarter Festival Opening Night Gala benefiting the Roots of Music will return to Antoine's Restaurant. Established in 1840, Antoine's, the country's oldest family-run restaurant, celebrates its 175th anniversary in 2015. During the gala, guests will enjoy the original Main Dining Room, the Mardi Gras-themed Rex and Proteus Rooms, as well as the Escargot Room, Mystery Room, 1840 Room, Last Room (or Tabasco Room) and Wine Cellar, which holds approximately 25,000 bottles when fully stocked. French Quarter Festival is the only time of the year when Antoine's allows a non-profit community organization to 'take over' - celebrating the opening of French Quarter Festival at this grand Gala event.

Guests will enjoy Antoine's most famous dishes and an open bar courtesy of Abita Brewing Company, Brown-Forman/Republic Beverages, and Pepsi. The Patron Party takes place from 7-8 pm and Gala from 8-10:30 pm. Entertainment by Guitarist John Rankin and Charmaine Neville with special guests. Tickets are now on sale and can be purchased online at www.fqfi.org or by calling 504-227-3124. Patron tickets are $250 and Gala tickets are $125 ($150 beginning April 1st). This year, a limited number of tables will be available for purchase.

- French Quarter Festival Second-Line Kickoff Parade will take place Thursday, April 9th at 10 a.m., a change from prior years when the parade rolled on Friday. The parade departs from the 100 block of Bourbon St and makes its way to Jackson Square.